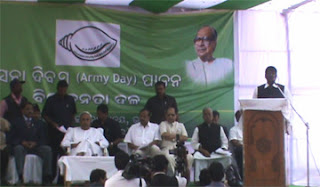 BJD Ex-Servicemen cell soon
Bhubaneswar:
Keeping in view the ensuing Assembly and Parliament elections and in order to
strengthen the party’s organizational structure, the ruling Biju Janata Dal
(BJD) on Wednesday added one more wing, ‘BJD Ex-Servicemen Cell’ to its fold on
the occasion of 66th Army Day.
More
than 1,000 retired Defence personnel coming from across the State joined the
party under the leadership of retired Lieutenant General, Narayan Mohanty and
Colonel L Parida at the BJD party office here in presence of party supremo and
Chief Minister Naveen Patnaik.
“With
the joining of so many ex-Army servicemen in BJD, the party will be strengthened
and simultaneously the system will be more effective, responsive and disciplined,”
said the Chief Minister, assuring that an Ex-Servicemen cell will soon be
opened in the party.
Expressing
his gratitude to the Chief Minister for approving opening of the BJD
Ex-Servicemen cell, retired Lieutenant General, Narayan Mohanty said the
ex-servicemen can be used during natural calamities in the State.
Mohanty
informed that more than 1.5 lakh ex-servicemen are residing in the State.
Agriculture
Minister and senior party leader Debi Prasad Mishra said, “The joining of these
disciplined people in the party would certainly help in executing the welfare
activities at the grassroots level properly. Besides, they would be engaged in
campaigning for the party during elections.”
Party
vice-president and Finance Minister Prasanna Acharya among many others graced
the occasion.