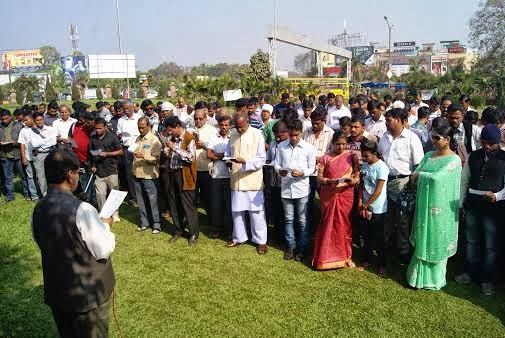 Bhubaneswar: Exuding confidence that his newly launched
party would emerge as a major political force in the state ahead of the next
elections, Ama Odisha Party (AOP) founder-president Soumya Ranjan Patnaik on
Thursday urged each party worker to rope in at least 10 members from his/her
booth within the next 10 days.
“This will strengthen the party,” Patnaik said addressing a
Sankalpa Sabha attended by newly recruited party workers at the Nehru
Park here this morning. “Given the
sterling work that Ama Odisha has done over the years, it should not be a
difficult task,” he said at the meeting coinciding with the birth anniversaries
of Netaji Subash Chandra Bose and Veer Surendra Sai.
Expressing confidence that Ama Odisha would receive
recognition as a political party from the Election Commission of India (ECI)
well in time for the elections, the Editor of ‘Sambad’ said AOP would provide a
real alternative to the existing parties all of which had failed to meet the
aspirations of the people.
Accusing other political parties of looting the mineral and
other resources of the state, Patnaik said; “Our state is blessed immense
mineral resources and vast forest cover. Besides, we have a 480 km long coast
line, which other states except Andhra Pradesh don’t have. Nature has given us
everything that we need. But we have remained the poorest state in the country
because our leaders have looted these resources for their personal benefit
rather than utilising them for the development of the state.”
Patnaik administered five ‘sankalps’ (vows) to the newly
recruited members: helping people understand, read and write in Odia; loving
Odisha; donating blood; encouraging people to use their franchise and to create
a new Odisha free of fear, bribe and corruption.
Similar ‘Sankalp Sabhas’ were organised by the party in all
314 blocks of the states on Thursday, Ama Odisha sources said.