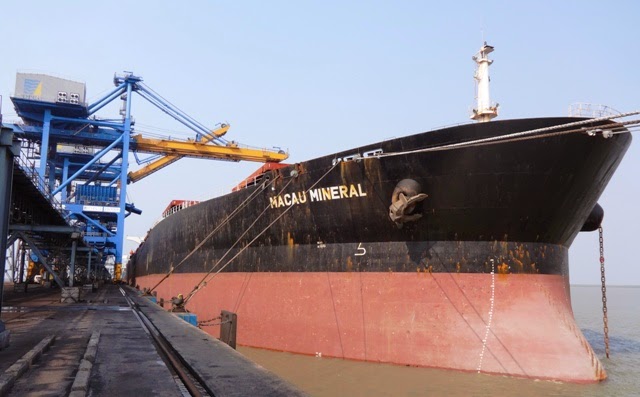 First time in Indian Port Sector
Dhamra/Bhadrak: Dhamra Port
has become first among the Indian ports to berth a parcel size vessel of 207785
DWT (dead weight tonnage), which has added another feather to the cap of this
deep sea modern port in the eastern coast of the country.
The vessel named ‘Macau Mineral’ is carrying 194073 tonnes
of coal from Richards Bay
in South Africa.
The South Korean made ship is 312 meters long and about 50 meters in breadth.
The ship bearing IMO No – 8716021 was built in 1989.
According to DPCL sources, the vessel had berthed at the Dhamra
Port jetty around 6 pm on March 26 and it is likely to depart
after unloading the cargo on March 29. It has 21 Chinese Crew headed by Captain
Wang Yongan. Macau Mineral is a panama registered super cape size vessel.  The Harbour Master of Dhamra Port Capt Mirza
Baig along with senior officials of DPCL were present during berthing of the
biggest parcel size vessel. 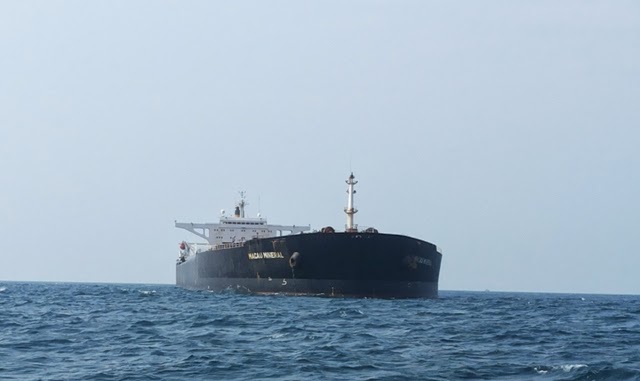 Dhamra Port
had started commercial operations in May 2011 and till date the port has
berthed 424 cargo ships including over 100 cape size vessels.
With fully mechanized loading and unloading facilities, the
port has a channel of 18 km which has 18 meter depth for berthing cape size and
super cape size vessels from all parts of the world. Presently, Dhamra
Port has two fully mechanized
berths of 350 meter each and DPCL has built a rail connectivity of 62 km fully
electrified railway line from Dhamra to Bhadrak connecting the main
Howrah-Chennai line for transportation of cargo.