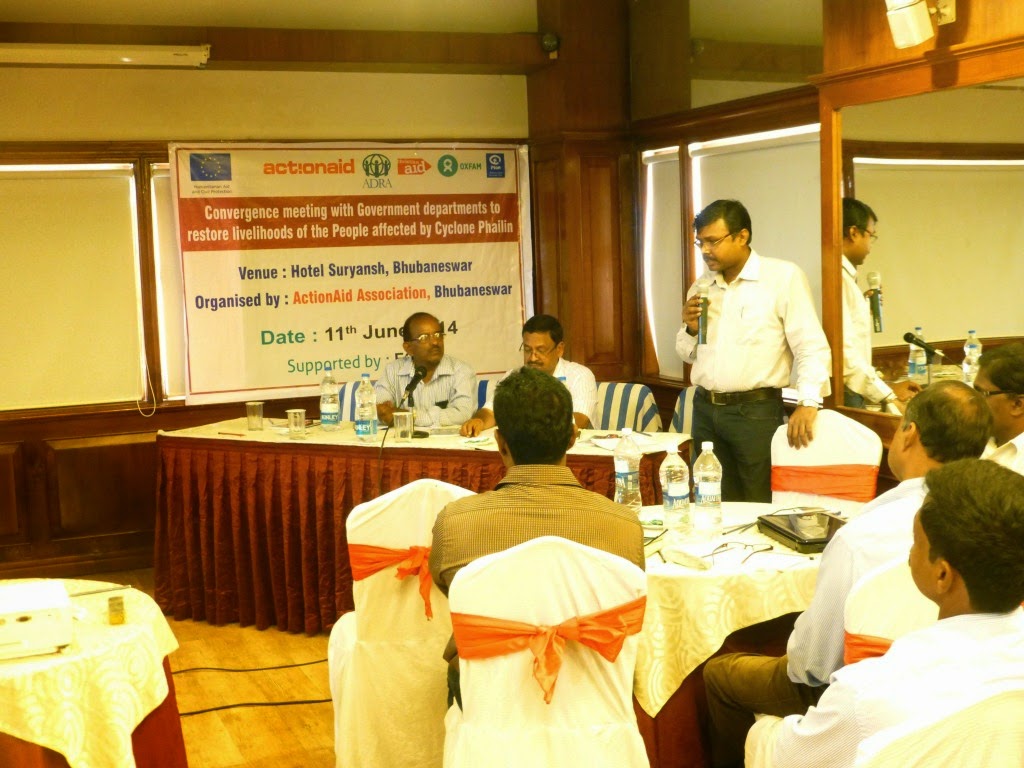 Bhubaneswar: An
ActionAid-led consortium with the support from European Commission Humanitarian
Office (ECHO) organized a convergence meeting with the government officials to
discuss on the GO-NGO linkages to speed up post Phailin response programme,
especially the restoration of livelihood of the people affected by cyclone
Phailin and its subsequent flood.
The onsortium which
comprises International NGOs like ActionAid, ADRA, Oxfam, Christian Aid and
Plan had a daylong discussion with the officials of Department of Horticulture
and Fisheries onto take forward the post Phailin response programme with the
support from the concerned departments.
Delineating the
objectives of the meeting, Mr Debabrat Patra, Regional Manager, ActionAid,
Odisha said that, “We have already initiated convergence with the concerned
government departments at our personal capacities but this meeting will be an
exclusive opportunity for us to explore various government schemes available in
Fisheries and Horticulture department so that we can find out possible ways and
means to converge with them especially for boats and nets, sapling and vegetable
seeds for kitchen garden.”
Participating in the
discussion, Mr. P.R.Rout, Asst. Director of Fisheries, Mr. Chintamani Behera,
Asst. Fishery Officer, Ganjam and Dr. Susant Das, Asst. Horticulture Officer
informed the gathering about the schemes and programmes and explained the
processes on how the people can be benefited from the ongoing programmes of the
state government. They also assured of possible support to take ahead the post
Phailin response programme, implemented by the Consortium. Apart from that the
role of Civil Society Organizations to spread the awareness of the government
programme was also discussed.
Mr. Ghasiram Panda,
Programme Manager moderated the programme. Among others, ActionAid Consortium
Manager Mr. Rajeev Jha and representatives from Save the Children Consortium
were also present.