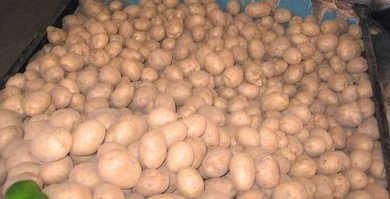 Bhubaneswar, Sep 1: As part of its efforts to become
self-sufficient in potato production, the Odisha Government has set a target to
produce 5 lakh tons of potato in Koraput district through small, marginal and
tribal farmers by the end of 2015 Rabi season.
To accomplish the target, a definite project
proposal prepared by PACT (Partners for Agri Communities and Tribal) has been
discussed in a high level meeting held under chairmanship of Chief Secretary
Gokul Chandra Pati here recently wherein Union Agriculture Joint Secretary Sanjeeb
Chopra along with a team of experts participated.
Considering the proposal the Chief Secretary has
advised to include specific action plan for human resource development, seed
multiplication, and genetic improvement of local varieties and establishment of
tissue culture labs in the project, besides emphasizing on establishment of
cold storages during this intervention. The Horticulture department has been
advised to finalize the project proposal by end of September, 2014 and start
field level operations simultaneously.
The soil and climate of Koraput has been found
conducive for potato cultivation both during the Kaharif and Rabi seasons while
the farmers of the district are also familiar with the crop and there are
growing many traditional varieties of tuber crop. The better planting material
supplied through the Horticulture department has brought about observable
improvement in production. Basing on these opportunities present project has
been designed to expand potato farming to 50,000 acrers involving 8000 farmers
of 200 villages in 10 blocks of the district, the meeting revealed.
The project envisages fetching an annual income of
Rs 2 lakhs per acre to the farmer through year round assisted farming while the
project will be monitored through a comprehensive Accountable and Transparent
process built on a world class ICT platform. The cost of the project has been
estimated at Rs 106 crore.
While the project will be implemented in PPCP mode available
data showed that through the horticultural interventions so far, 18 famer
interest groups have been formed with 868 farmers from 16 villages of 3 blocks
like Laxmipur, Dasmanthpur and Banhugaon. Approximately 4000 quintals of 11
varieties of potato has been sown for extensive trails.