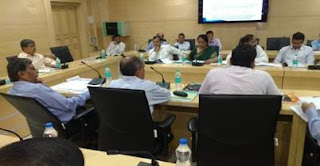 Padhi reviewed NH projects at the State Scretariat with the
senior officers of the Ministry of Road Transport and Highways. He emphasised
on development of the National Highway from Vizag to Jagdalpur which connects
Andhra Pradesh, Odisha and Chhattisgarh passing through Sunki, Koraput,
Jeypore, Nabrangour, Buriguma and Kotpad in Odisha.
Padhi too stressed on expediting works of the
Vijayawada-Ranchi Corridor connecting Andhra Pradesh, Odisha and Jharkhand and
early completion of Berhampur-Rayagada road development work.
Currently, a total number of 22 NHs are passing through
Odisha. They are NH 16, 18, 20, 26, 49, 53, 55, 57, 59, 63, 130C, 143, 149,
153B, 157, 220, 316, 326, 326A, 353, 516
and 520. The total length of these roads in Odisha is around 4849.42 km.
While the State PWD has been assigned to develop 3,387 km, the NHAI has
undertaken works for the rest 1462.42 km.
By now, the PWD has completed 867.39 km roads and set a
target to complete 489 km roads during the current year. Chief Secretary
directed the department to fix monthly targets for completion of works.
Similarly, the NHAI has completed development works of 610 km
roads and work for 529 km roads is now underway. The bidding process for around
243 km has been completed and the projects for development 596 km are in the
pipeline.
Works Secretary
Nalinikanta Pradhan requested officers of the Ministry to sanction the road
projects submitted by the State Government. Out of 44 proposals of Rs 1,047
crore submitted, the Centre has given in principle approval for only 12
proposals of estimated cost of Rs 400.97 crore.
Apart from this, Centre has approved two projects of Rs148
crore under Inter State Connectivity Scheme and two others of Rs 198 crore
under the Economic Importance Scheme.
The issues relating to land acquisition, disbursement of
awarded compensation, forest clearance and DGPS survey were discussed.