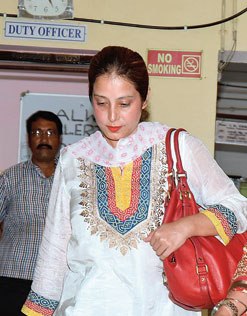 Cuttack, Aug 18: The Orissa High Court on Thursday
rejected the bail application of Indu Dewan, sister of Mumbai-based model Preeti
Bhatia in connection with the chit fund scam.
The CBI arrested Indu on October 17 last year in
connection with her alleged complicity with the tainted chit fund company Artha
Tatwa (AT) Group of Companies and its CMD Pradip Sethy.
Prior to Indu’a arrest in October last year, her
sister Priti Bhatia was arrested by the CBI but she was granted bail by the
Supreme Court in November last year after the Orissa High Court rejected her
plea.
The Supreme Court granted bail the serial maker
Preeti Bhatia, after Bhatia deposited Rs 1,17,83,000 (one crore seventeen lakh
and eighty three thousand) in the CBI court for the bail in Bhubaneswar. On May
1, 2015 the Supreme Court had asked her to deposit the amount in the lower
court to expect a bail from the apex court.
Indu, was accused of misappropriating money invested
by AT Group chief Pradip Sethy in her production house, Prismheights in Mumbai.
Indu, her sister Preeti Bhatia and Sethy are
directors in Prismheights where AT Group had invested more than Rs1.5 crore for
producing television serials.

Bengali girl, another person held for ganja smuggling in city