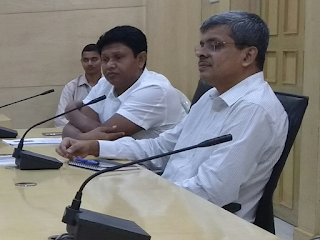 Bhubaneswar,
Oct 14: For the first time, a National Association of Software and Services
Companies (NASSCOM) Chief Executive Officers’ (CEO) Conclave is going to be
organiaed in Bhubaneswar from November 26 to 29.
This
was discussed at a high-level meeting at the State Secretariat on Friday in the
presence of Minister of Electronics & IT Pranab Prakash Das and Chief
Secretary Aditrya Prasad Padhi. It was decided that IT potentials in Odisha
would be showcased in this event. The Government would provide all possible
support for successful organisation of the event.
Electronics
& IT Department Principal Secretary Pradeep Kumar Jena told reporters that
the NASSCOM Executive Council consists of 25 Chief Executives of the top IT
companies in the country. The conclaves of this body are usually held in metro
cities. This is for the first time that the body has decided to hold its
conclave in Bhubaneswar.
Jena
further informed that around 35 to 40 CEOs of the leading IT companies would
attend the conclave. This would be a befitting occasion to showcase the IT
opportunities in Odisha long with the progressive policies like ‘Ease of Doing
Business’ and facilitating supports provided by the State Government.
Eminent
scholars like Devdatt Patnaik would also address the conclave, which would have
different sessions at Gopalpur, Bhubaneswar and Puri.
Tourism
Principal Secretary Gagan Kumar Dhal, Skill Development & Technical
Education Secretary Sanjaya Singh, Culture Secretary Manoranjan Panigrahi and
Commissioner of Police YB Khurania participated in the discussions.