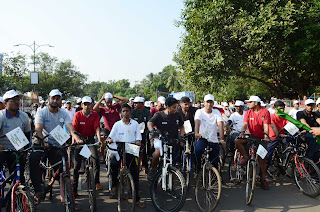 Bhubaneswar, Nov 6: Around 300 cyclists on Sunday joined
Cyclothon to support the cause of clean and green energy here.
Oxfam India, in collaboration with Bhubaneswar Municipality
Corporation (BMC) and Bhubaneswar Development Authority (BDA) and its campaign
partners Practical Action, Climate Parliament, Youth for Social Development and
Regional Centre for Development Cooperation, organised the ‘Cyclothon’ from Ram
Mandir to KIIT Square. 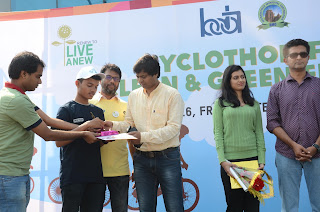 The Cyclothon was a part of the Oxfam India’s public facing
campaign on renewable energy “Renew to live anew” and is initiating a public
facing campaign for renewable energy in Bhubaneswar, Odisha.
Bhubaneswar MP Prasanna Patsani flagged off the campaign in
the presence of BMC Mayor Ananta Narayan Jena and many others.
“As Bhubaneswar is
becoming a Smart City, it is important to meet the growing energy demands and
we need to start thinking of more about alternative sources of energy mainly
solar, wind, etc. Based on this context, the campaign attempts to reach out to
the urban middle class to make them aware about the rising energy crisis and
how they can make use of more renewable options. We are hopeful that the
campaign will raise awareness towards this end,” said Oxfam regional director Akshaya
Kumar Biswal.