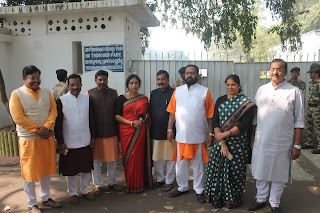 Bhubaneswar, Dec 27:
Coming down heavily on the State Government for not accepting the proposal of
the State Election Commission (SEC) for provision of separate ballot boxes for
Zilla Parishad (ZP) polls during the ensuing three-tier panchayat polls, the
BJP on Tuesday sought the intervention of Governor Dr SC Jamir in this regard.
The
party also demanded counting of votes across the State on a single day.
An
eight-member delegation of the saffron party led by its State unit president
Basant Panda met the Governor and submitted a memorandum seeking his immediate intervention
for a free and fair poll.
“Since
ZP polls are conducted with party symbols, we demand before the Governor that there
should be separate ballot boxes for this polling. The counting and announcement
of votes should also be done on a single day across the state so that it can’t
influence election prospects of other tiers,” said Panda.
He
charged that though the SEC has given many proposals, including the separate
ballot box provision for ZP polls to the State Government since a long, but
nothing tangible has happened as yet by the ruling BJD Government.
Notably
on Monday, during an all-party meeting convened by the SEC, the party also
placed the same demand before the State Election Commissioner Rabi Narayan
Senapaty who in turn informed that the same has been intimated to the Government
for consideration.