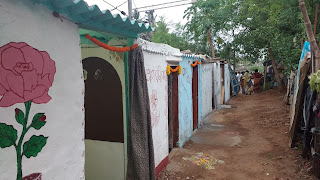 Bhubaneswar,
June 2: In reel-life you might have seen noted actress Vidya Balan fighting for
pride of the newly-wed brides. However, within the smart district of the Temple
City, a newly-wed bride has practically proved her social and motivational
skills in constructing a toilet for her family and more interestingly,
decorating the toilet wall on her own depicting a name to it “Ama Swabhimana”
(Our Pride) at Kathagola Basti in Bapuji Nagar.
Yes! If you
want to see the reel-life messages of Swachha Bharat being translated in true
spirit by ordinary change makers in an extra ordinary way, then come to the
Bhubaneswar Town Centre District (BTCD) area and realise the transformation
taking shape by motivated slum residents.
The list of
those change makers include newly-wed Lilly Behera and many others, who have
become real heroes in order to make the Smart City Dream of a clean, green and
liveable city, just a step closer. In this slum the women folks took the lead
and ensured completion of toilets in time, bringing an end to open defecation.
They also gave a new look to the toilets by adding traditional paintings on the
wall, giving the series of toilets a look of a wall art.
Today, while
celebrating the ODF feat the residents organised a “Gaurav Yatra” (Walk of
Pride) in which, BMC Deputy Mayor K. Shanti and senior officials of city administration
participated to encourage the noble efforts.
Additional
Commissioner-cum-Member Enforcement of Bhubaneswar Development Authority Bhabani
Shankar Chayani, GM (Operations) Bhubaneswar Smart City Limited (BSCL) Binaya
Kumar Dash and BSCL OSD Santosh Kumar Mishra were present.
As a mark of
victory over open defecation, the slum residents organised a symbolic burial of
the utensils used by the people for open defecation practice. They collected
the items in a cement bin and later buried them as mark of an end to the evil
practice.
Speaking on
the occasion, the Deputy Mayor encouraged the slum residents by thanking them
to adopt a noble cause and wished all other slums within the BTCD area and
outside would also follow suit. Local corporator Mahamaya Swain, who actively
campaigned for ODF, was also present.
After Kalinga
Basti (Bapuji Nagar), Birsa Munda-1 Basti in Sahid Nagar and Timber Colony
Basti in Satya Nagar, today Kathagola Basti in Bapuji Nagar became the fourth
slum in the BTCD area within a month to become open defecation free (ODF).
It will be
certainly a unique achievement by the people themselves through their active
participation through the “Nigrani Committees” or surveillance squads, through
which the residents, especially women, are monitoring activities of the people
defecating in the open and motivating them not to continue the act further.
It may be
noted here that BSCL has engaged Feedback Foundation for carrying out the ODF initiative
within the BTCD area in coordination with Bhubaneswar Municipal Corporation.