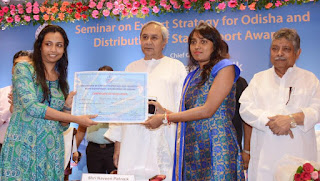 The CM also distributed award winning exporters,
entrepreneurs and the newly inducted scientific assistants of MSME Department
and urged collective efforts to create a position for Odisha in exports.
The CM also informed that the Odisha Export Policy-2017 will
be unveiled soon to boost the sector in the State. “All export related
organisations will be brought under one roof for Ease of Doing Business,” added
the CM.
Micro Small and Medium Enterprises Minister Prafulla Samal
also spoke.