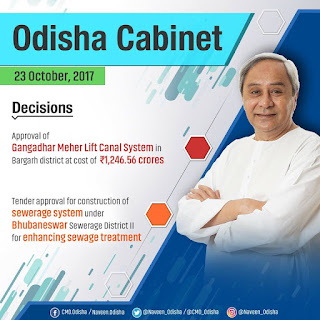 Bhubaneswar, October 23, 2017: The State Cabinet
chaired by Chief Minister Naveen Patnaik on Monday approved three proposals, including
the ambitious Gangadhar Meher Lift Canal System in Bijepur in Bargarh district.
First of its kind in India, the project will be
built at Rs 1246.56 crore and
completed in five years.
“It will provide
irrigation to rainfed and drought prone
areas of about 25,600 hectares in Bijepur, Sohela and Barpali blocks of Bargarh
district. It will ensure irrigation for a total of 32,000 hectares across both
Kharif and Rabi seasons,” said Agriculture Minister Damodar Rout after the Cabinet.
Tender will be floated for the proposed irrigation project by
March next year, added Rout.
The project will be named after renowned poet Gangadhar
Meher, whose native place Barpali is part of Bijepur Assembly constituency.
Earlier on October 16, Chief Minister Naveen Patnaik
announced the Bijepur Lift Irrigation project which would be the first of its
kind with underground pipeline based irrigation system keeping in view the
upcoming by-poll for Bijepur assembly seat, which was necessitated after the
death of sitting Congress MLA Subal Sahu in August. Sahu’s wife Ritarani is the
BJD nominee for the by-poll.
The project will be the first underground pipeline based
irrigation system in the State.
The Cabinet also approved tender for construction
of sewerage system under Bhubaneswar Sewerage District II. It will enhance
sewage treatment facilities in Smart City Bhubaneswar.