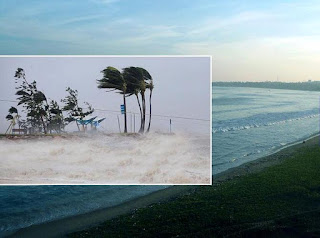 Bhubaneswar, November 16, 2017: Chief minister Naveen Patnaik
on Thursday directed all the collectors to monitor the situations prevailing in
their districts due to unseasonal rainfall and asked them to inform about the
steps taken by them to save farmers in distress.
In a video conferencing the Chief Minister held a discussion
with the district Collectors and also directed the field functionaries of the
Revenue and Disaster Management Department and Agriculture and Farmers’
Empowerment Department to stay in touch continuously with the farmers affected
by the rains.
The Chief Minister asked the field officials of the two
departments not to remain alert on Sunday despite the day being a holiday.
He asked them to ensure procurement of paddy at the Minimum
Support Price (MSP) prices and the farmers should not face any problem.
The Collectors have been directed to implement the packages
for the farmers affected due to drought and pest attack meticulously.
The Chief Minister also directed them to take advance action
for the Rabi crops so that the farmers are able to start sowing operation
without delay.
Chief Secretary AP Padhi, Development Commissioner R
Balakrishnan, Special Relief Commissioner Bishnupada Sethi and of Agriculture
and Farmers’ Empowerment Secretary Saurabh Garg and other top officials were
present during video conferencing.
Meanwhile, Puri recorded the highest rainfall for the second
consecutive day on Thursday with 56 mm followed by 52.3 mm in Jagatsinghpur,
44.3 mm in Gajapati, 44 mm in Kendrapara, 39.3 mm in Ganjam, 35.2 mm in
Bhadrak, 31.3 mm in Khordha, 30.6 mm in Jajpur, 30.2 mm in Cuttack, 28.8 mm in
Balasore, 27.5 mm in Nayagarh, 15.2 mm in Dhenkanal, 14.9 mm in Kandhamal, 13.6
mm in Mayurbhanj, 11.7 mm in Rayagada, 8.7 mm in Boudh, 8.3 mm in Angul, 6.7 mm
in Keonjhar, 3.6 mm in Koraput, 0.7 mm in Subarnapur, 0.5 mm in Kalahandi, 0.4
mm in Nabarangpur and Sambalpur, 0.3 mm in Sundargarh and 0.1 mm in Bargarh.
At least five districts-Bolangir, Deogarh, Jharsuguda,
Malkangiri and Nuapada- did not receive any rainfall.
Meanwhile, the depression over West Central Bay of Bengal and
adjoining northwest Bay of Bengal off north Andhra Pradesh­south Odisha coasts
moved slightly northeast wards and lay centred at 2.30 pm on Thursday near
latitude 17.8°N and longitude 84.5°E, about 110 km east of Visakhapatnam and
185 km south­southwest of Gopalpur.
The system is very likely to move northeastwards off north
Andhra Pradesh­ Odisha coasts during next 12 hours maintaining its intensity,
said an IMD release.
Thereafter, it is very likely to continue to move north-eastwards
and weaken gradually.