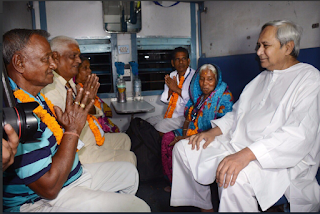 Bhubaneswar, November 23, 2017: As many as 1,024 senior
citizens left for Ajmer and Pushkar in Rajasthan in a special train on Thursday evening for pilgrimage under the State Government’s Baristha Nagarika Tirtha
Yatra Yojana, a pilgrimage plan for senior citizens.
Chief Minister Naveen Patnaik flagged off the pilgrim train at
the Bhubaneswar railway station. The initiative was launched by the CM for the
second consecutive year.
The CM also shared some moments with the elderly people
inside the train before flagging off the the train.
The entire tour will take a week’s time. A doctor has accompanied
the pilgrims in the train.
Like previous year, the State Government also plans to run
two pilgrim trains from Berhampur and Sambalpur.
While pilgrims from Berhampur would visit
Tirupati in Andhra Pradesh and Vellore in Tamil Nadu and those senior citizens who
will start journey from Sambalpur would get chance to visit Siridi and Trimbakeshwar in
Maharashtra. The CM is scheduled to flag off the trains soon there.
Over 750 to 1000 elderly people can avail the benefit to
visit various religious places across the country in each train.
With an aim to ensure that the poor senior citizens of the
State realise of their lifelong dream of having one Tirtha Darshan (Pilgrimage)
and fulfills their spiritual aspirations, the State Tourism Department had launched
the initiative last year.
This scheme is meant for people of all regions and faith and
helps senior citizens over 60-75 years of age to undertake pilgrimage at
Government assistance.
Under the scheme, the pilgrims from below poverty line (BPL)
categories can avail 100 per cent concessions under the scheme while non-BPL
pilgrims (except income tax payee) in the age group of 60-70 years can avail 50
per cent concessions. Those above 70 and up to 75 years can get 70 per cent
concessions.