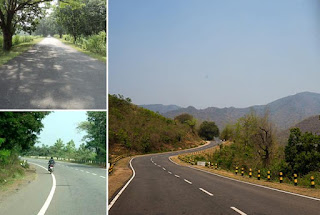 Bhubaneswar, November 23, 2017: Odisha has completed
construction of over 42,000 km of roads connecting 13,063 habitations under Pradhan
Mantri Gram Sadak Yojna (PMGSY) so far.
Union Rural Development Secretary Amarjit Sinha hailed Odisha
for this achievement.
“With such a feat, Odisha had become a lead performer in
implementation of PMGSY,” remarked Sinha in a high level review meeting chaired
by Chief Secretary Aditya Prasad Padhi at the State Secretariat on Thursday.
Encouraged by the pace of work, Sinha advised officials to
enhance the current years’ target to 10,000 km. Sinha assured to communicate
the sanction order soon.
PMGSY is being implemented with fund support from both the
Central and State Government on 60:40 basis.
Reviewing the progress, Padhi directed officials to submit
the balance (detailed project reports) DPRs against all feasible projects
within 15 days.
State Rural Development Secretary Bishnupada Sethi, who
outlined the administrative, technical and financial issues relating to PMGSY,
drew the attention of Union Secretary to the pending 265 DPRs at the level the
Central Government.
Discussions in the meeting showed that the field level work
was going on in full swing for completion of another 14,800 km of road that
would connect more 3,492 habitations.
Sethi appraised that the projects would be completed by
March, 2019.
It was decided in the meeting that the DPRs for connecting 92
habitations in Malkangiri district would be submitted for approval after
completion of the Gurupriya Bridge which was targeted to be completed by March,
2018.
Review of the progress during the current year revealed that
earlier target was set to construct 7,000 km of roads connecting 2,800
habitations.
As of now, more than 2,100 km of roads have been completed.
The meeting was also attended by Panchayati Raj Secretary Deo
Ranjan Kumar Singh, Works Secretary Nalinikanta Pradhan, Rural Development
Engineer in Chief Bharat Chandra Pradhan and other senior officers from the
concerned departments.