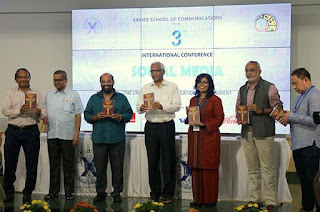 Bhubaneswar, December 16, 2017: “I do not consider fake news
as an issue in journalism because it is FAKE, and hence not even a news,” said
Ariel Sebellino, Director of Philippine Press Institute.
Ariel while speaking at the third International Conference
of the Xavier School of Communications (XCOMM), Xavier University on Saturday,
“News is packaged in such a way that it becomes a journalistic product. Lines
are blurring between legitimate journalism and propaganda, entertainment,
self-promotion and unmediated information on Internet.”
He said that the students and media scholars that fake news
has often been used as “hate news.”
“It is a deliberate and systematic propaganda where
journalists are under attack for publishing against the government”, he added.
The Conference was inaugurated by Prof Dr Paul Fernandes,
Vice-Chancellor of Xavier University Bhubaneswar, E A Augustine, Registrar,
Xavier University, Prof Lourudraj Ignacimuthu, Dean of XCOMM, Areil Sebellino
and Dr Sharon Wilson from University Tunku Abdul Rahman, Malaysia on December
15 in the Xavier University campus.
A book titled “Media and Democracy” which was edited by Dr.
George Sebastian SJ, Visiting Faculty, XCOMM-XUB was released on the occasion.
Krishna Prasad, former Editor-in-chief of The Outlook spoke
about how social media especially Google, Facebook and Twitter has evolved as
WMD (Weapons of Mass Destruction) and how media has lost its empathy.