Focusing on the highly important issue of sustainable river
basin management, Patnaik said, “Equitable water sharing among riparian States
with strong responsibility towards healthy river system should be ensured. The
greed for water and territorial approach to ownership of rivers is increasingly
leading to water conflict. If we have to conserve our rivers, we have to be
empathetic to the needs of every stakeholder including that of the river.” 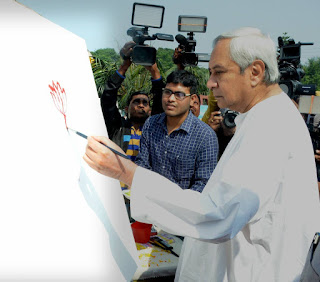 The CM’s observation came at a time when the State is
dealing with the Mahanadi water sharing dispute with neighbouring BJP-ruled Chhattisgarh
Government.
Patnaik was speaking at the Odisha Environment Congress-2017.
Maintaining that the gluttony for water, territorial
approach to ownership over river water and utter disregard to environmental
needs of the river system have most often led to water conflict, Patnaik said,
“Unless all riparian State respect the philosophy and principles of equitable
sharing of river water with due to regard to its health and follow the
territorial approach, such conflicts are bound to magnify in future and lead to
disharmony in the country.”
Patnaik also highlighted the Government’s initiative for
plantation of two crore trees within the radius of one kilometre along both
sides of the Mahanadi and other major rivers of the State for water and soil
conservation.
Noted Environmentalist and River Man Dr Rajendra Singh spoke
on the occasion. He stressed on the importance of healthy rivers.