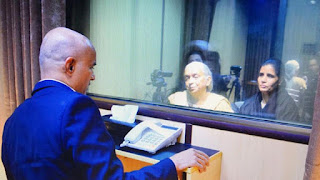 New Delhi,
December 27, 2017: Vice President M Venkaiah Naidu on Wednesday described
Pakistan’s handling of Kulbhushan Jadhav’s meeting with his family members as
inhuman and said the act has hurt the sentiments of Indians. 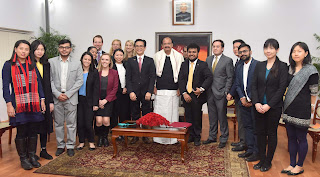 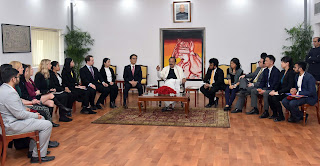 He said so
while interacting with 17 member faculty and students from Harvard, Stanford
and MIT of the USA.
During the
40-minute interaction, Naidu eloborated and responded to queries on India’s
strengths, opportunities and challenges besides its emergence as a global
power.
Naidu said
that India seeks peace in the region for the benefit of all the countries but
some are adopting a different approach.
“Pakistani
authorities insisting on removal of ‘mangalsutra’ by the wife of Kulbhushan
Jadhav and other restrictions did not go well with the people of India and
Pakistan did not do any good for itself in this regard even as it sought to
showcase its gesture by allowing the family union to the world,” said the
Vice-President.
On December
25, Pakistan allowed Kulbhushan Jadhav to meet with his mother and wife on what
they said on “humanitarian grounds”. The meeting which ran about 40 minutes saw
Jadhav and his family members separated by a glass window. Also, Pakistan authorities
conducted the meeting via intercom.
But what
came across as shocking from Pakistan is the way they treated the wife and
mother of Jadhav. Pakistan authorities made sure to harass the Jadhav’s mother
and wife by forcing them to remove the ‘mangalsutra’.
It was the
first time Jadhav met with his family members after more than a year and a
half. He was arrested by Pakistan’s authorities in March 2016. However, Indian
authorities have said that he was kidnapped in Iran.
If that was
not enough, Jadhav’s family was interrupted while speaking in Marathi and Hindi
by Pakistan’s foreign ministry official, Fereha Bugti. They had to, off and on,
switch to English and again Marathi or Hindi to continue the conversation.