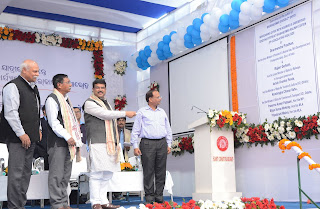 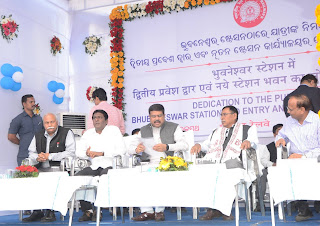 New booking office with reserved and unreserved ticketing system
at Sakhigopal railway station was also dedicated to the public through video
conferencing from Bhubaneswar, on this occasion.
Union Minister Pradhan appreciated the efforts of East Coast
Railway in planning of a six meter wide foot over bridges at Bhubaneswar and
Bhadrakh and said that all efforts should be made to complete the work in 2018
calendar year. 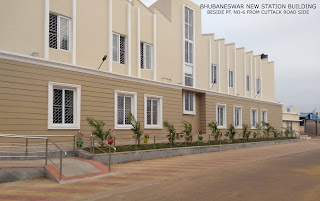 Union Minister Gohain said that fund for the projects in this
region will not be a constraint. He also said that the ongoing projects in this
region will be completed in due course as per the target date.
He requested state Government to co-operate with Railways by
providing land so that ongoing projects will be completed at the earliest.
New Station building at platform number six at Bhubaneswar station
was constructed at a cost of Rs 1.97 Crores having facilities like booking counter-cum-lobby,
second class waiting hall, upper class waiting hall, food plaza, TCI office, toilets
for Divyang passengers, pay and use toilets and circulating area with barricade.
Similarly, the new station building at Sakhigopal station was
completed at a cost of Rs 1.55 crore having facilities like booking counter-cum-lobby,
second class waiting hall, toilets for ladies and gents, circulating area and approach
road.
ECoR general manager Umesh Singh among any other attended the
event.

Road show held in Hyderabad ahead of Make in Odisha conclave