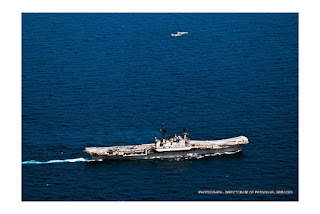 New Delhi, January 8, 2018: Saudi Arabia has given the green
signal for India’s decision to revive the option of sending Haj pilgrims
through sea route, informed Union Minister for Minority Affairs Mukhtar Abbas
Naqvi on Monday.
Officials from both the countries will discuss on all the
necessary formalities and technicalities so that Haj pilgrimage through sea
route can be started in the coming years.
A decision in this regard was taken on Sunday, during the
signing of bilateral annual Haj 2018 agreement between India and Saudi Arabia
by Naqvi and Umrah Minister of Kingdom of Saudi Arabia, Dr Mohammad Saleh bin
TaherBenten at Makkah.
Naqvi said that sending pilgrims through ships will help cut
down travel expenses significantly.
“It will be a revolutionary, pro-poor, pilgrim-friendly
decision,” said Naqvi.
The practice of ferrying Haj pilgrims between Mumbai and
Jeddah by waterways was stopped from 1995.
The Minister said that another advantage with ships available
these days is they are modern and well-equipped to ferry 4,000 to 5,000 persons
at a time. They can cover the 2,300-odd nautical miles one-side distance
between Mumbai and Jeddah within just three-four days. Earlier, the old ships
used to take 12 to 15 days to cover this distance.
He said that this time Haj 2018 has been made 100 per cent
digital/online. India’s transparent and
digital Haj process has been lauded by
Saudi Arabia Government.
Naqvi said that for the first time Muslim women from India
will go to Haj without “Mehram” (male companion). Separate accommodation and
transport has been arranged for these women Haj pilgrims in Saudi Arabia and
women “Haj Assistant” will be deployed for their assistance.
He pointed out that more than 1,300 women have applied to go
for Haj without male “Mehram” and all of these women will be exempted from
lottery system and allowed to proceed to Haj. Women above 45 years of age, who
wish to go for Haj but who don’t have a male companion, are allowed to travel
for Haj in groups of four or more women according to the new Haj policy of
India.
The Minister informed that about 3.59 lakh applications have
been received for Haj 2018.