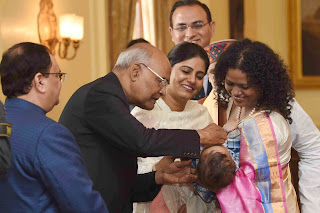 New Delhi, January 27, 2018: More than 17 crore children
of less than five years across the country will be given polio drops as part of
the Pulse Polio Programme in 2018.
President Ram Nath Kovind, launched the programme for 2018
by administering polio drops to children at the Rahstrapati Bhawan, in the
presence of the Union Minister of Health and Family Welfare JP Nadda on the eve
of the National Immunization Day, on January 28. 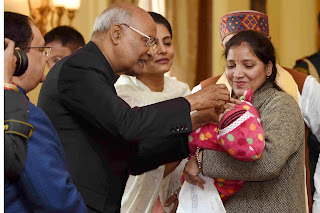 Speaking on the occasion Nadda said in order to mitigate the
risk of poliovirus importation, the immunity against polio infection is
maintained through National and Sub-National Polio rounds along with sustained
high quality polio surveillance.
To provide additional protection to our children, Government
of India has also introduced the injectable Inactivated Polio Vaccine (IPV)
into its routine immunization programme, said Nadda.
Nadda said that Universal Immunization Programme (UIP) is
focusing on to protect children from more diseases than ever before and has
introduced several new vaccines like Pneumococcal Conjugate Vaccine, Rotavirus
vaccine, and Measles-Rubella in the recent past.
“To further strengthen and accomplish our goals we have
launched Mission Indradhanush and encouraged by its success, we have recently
intensified the mission in October, 2017 to achieve more than 90% full
immunization coverage by 2018,” said Nadda.
The Union Minister further informed that strengthening of
immunization programme has significantly contributed to the decline of Infant
Mortality Rate from 39 in 2014 to 34 per 1000 live births in 2016 (as per SRS
reports).
Also present at the function were Ministers of State
(Health) Ashwini Kumar Choubey and Anupriya Patel, Department Secretary Preeti
Sudan among many others