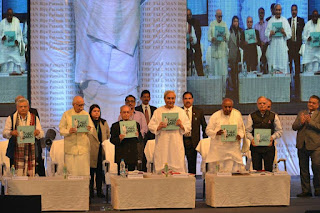 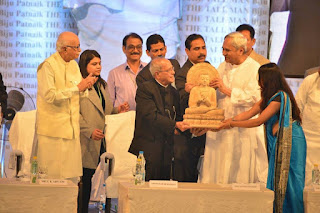 Former President Pranab Mukherjee, BJP veteran and former
Deputy Prime Minister LK Advani, former Prime Minister HD Deve Gowda and CPI
(M) general secretary Sitaram Yechuri not only released the 180-page book in
the presence of people of all walks of life at the Utkal Mandap here but also
got emotional while sharing their personal and political relationships and
experiences with Biju Babu.
“When I received the invitation I thought perhaps it is the
opportunity for a short man like me to pay homage to a truly tall man of not
only Odisha, but also of India,” said the former President. 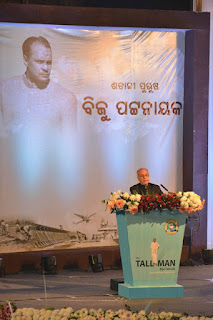 “What a short man like me will speak of a truly tall man in
Biju Patnaik. Politically we were not on the same side ever. But mentally and
on ideological principles, political analysis of the situations, we shared many
things in common,” said Mukherjee.
He also shared about the strong support of Biju Ptanaik he
had received, while he was made a MoS Finance as well as in the time of Planning
Commission Deputy Chairman.

“Truly he was a nationalist from the very beginning to the
end,” asserted Mukherjee.
The former President also recalled the courage of Biju
Patnaik who risked his life to rescue the foreign leaders from other places
like Indonesia. 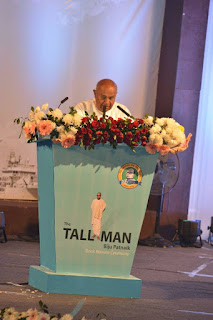 Maintaining that Biju Patnaik is creator of modern Odisha,
Mukherjee said the former was the author of Nalco which was established in 1980
in Odisa when he was the Union Steel Mines Minister.
“He was a legend in his lifetime. When he had a spectacular
victory in 1961, I was not even in politics. I was teaching political science
in a degree college. He became a legend because of his contribution. He was
confined to the territorial geography of Odisha. He always thought he belonged
to the people. He is truly a member of the international community. He was
truly a tall man who never knew fear in his life,” said Mukherjee.
Former Prime Minister Deve Gowda said he knew Biju Patnaik
as a freedom fighter, politician and personally a friend of mine. 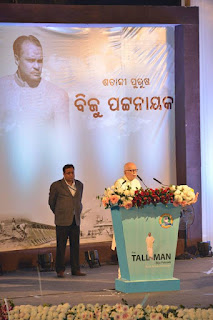 “He is well known to do impossible things. Bhumi Putra of
Indonesia Biju was a visionary whose dreams came true as thing maker,
successful administrator, empire builder. Through the detail life history of Biju
Patnaik, I strongly feel and recommend that the Government of India must confer
Bharat Ratna on Biju Patnaik for his exemplary service before and after
Independence. He richly deserves the highest India award,” said the former PM. 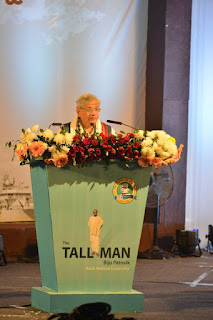 Former Deputy PM Advani graced the occasion saying never has
he graced such an exceptional book release ceremoeny.
Speaking on the occasion, CPI (M) leader Yechury said, “To
commit ourselves to carrying forward the vision of a modern India, a secular
India, a democratic India and that is what I think the proper homage to Biju
Babu would be.”
“In my view Biju Babu is an idea in continuity, an idea of
realizing the breadth of human aspirations, an idea of Odia self-esteem,
selfless service and empowerment,” said Chief Minister and son of Biju Patnaik
Naveen Patnaik.
Patnaik presided over the programme, while renowned
journalist and writer Prabhu Chawla presented a brief outline on the book. The
book has been written by Sundar Ganesan and published by the Biju Patnaik Birth
Centenary Committee. 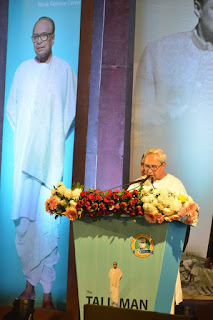