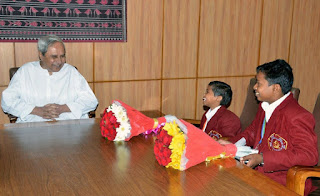 Bhubaneswar, January 29,
2018: From this year, winners of National Bravery Award from Odisha would get
cash award of Rs 1 lakh from the State Government, announced Chief Minister
Naveen Patnaik on Monday here. 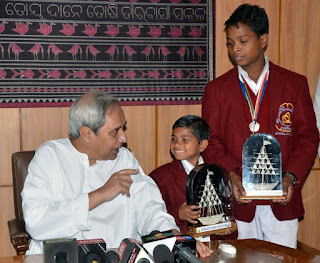 Patnaik met Mamata Dalai
and Pankaj Mahanta, who received the National Bravery Awar on Republic Day from
Prime Minister Narendra Modi at the State Secretariat here and felicitated them
with mementos and cash reward of Rs 1 lakh each.
“Our little hero Mamata
Dalai & braveheart Pankaj Mahanta came to visit me after being conferred
the #NationalBraveryAwards on Republic Day in Delhi. Shared wonderful
fun-filled moments with them as they recounted their experiences there. Mamata
may be a little one but her energy and enthusiasm is truly infectious,” said Patnaik
in his facebook page.
On
January 24, Prime Minister Narendra Modi presented the National Bravery Awards
to 18 children, including Dalai and Mahnata from Odisha, in a function in New
Delhi.
On
Sunday, Union Minister Dharmendra Pradhan too honoured the two kids at his
residence here.
Mamata
Dalai, a six-year-eight-month-old girl, a resident of Bankual village within
Bhitarkanika National Park of Kendrapara district was selected for the National
Bravery Award for saving the life of another minor girl Asanti Dalai (7) from
the jaws of a salt-water crocodile in her village pond on April 6, 2017 in
Kendrapara.
Pankaj
Kumar Mahanta (14) from Keonjhar was chosen for the bravery award for saving
three lives from Baitarani river by pulling three women one by one from the
river on May 22 last year.