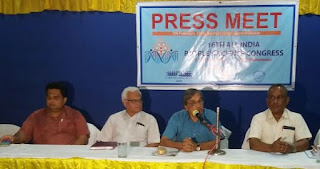 Bhubaneswar, February 7, 2018: Around 800 eminent scientists
from across the country will participate at the ensuing four-day All India
People’s Science Congress (AIPSC) at NISER in Jatni in Khurda district.
Scientists from 42 science forums of All India People’s
Science Network (AIPSN) from across the country will come together for the
promotion of science and public participation in science and technology at NISER
from February 9 to 12.
Delegates to the congress will represent a spectrum of
representation, including scientists, academics, policy makers, activists
working at community level for science popularisation etc. The objective of the
AIPSN is for advancing, promoting and furthering the cause of science in India.
It is a network of Science Forums with a social outlook working all over the
country, said AIPSN president Sabysachi Chatarjee in a press conference on Wednesday.
Discussion will on science popularization; Environment,
Climate Change and Development; S&T, Emerging Technologies and Self
Reliance; Decentralization and Democratization and Technology Application; Technology
Applications in Agriculture to Promote Food Security; Education and Literacy; Health
and Medicines; and Social Exclusions: The Role of Science and Technology.
Prajval Shastri of Indian Institute of Astrophysics, TV Venkateswaran,
Vigyan Prasar, Satyajit Rath, IISER, Pune among many eminent personaliets will speak
during the four-day long gathering.
Planning and Convergence, Skill Development and Technical
Education Minister Usha Devi will inaugurate the event on February 9.