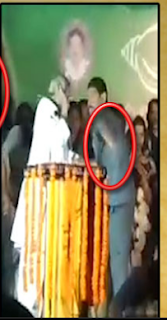 Barpali, February 20,
2018:  Shoes were hurled at Chief Minister
Naveen Patnaik while he was addressing a public meeting as part of the ongoing election
campaign for the February 24 by-poll for the Bijepur Assembly constituency on
Tuesday.
The incident occurred
while Patnaik was about to end his public address and preparing to leave the podium.
Two shoes were hurled at
the Chief Minister in succession one to his left and the other to his right
side. However, the personal security officer (CMO) prevented the shoes from hitting
the CM.
Party supporters caught
the alleged attacker, identified as Kartik Meher of Padmapur, and beat him up
before the security personnel took him to their custody. The accused was
sitting in the front row just a few feet away from the dais. He was detained by
the police.
However, the accused
youth denied having any political affiliation while police seized BJP flag from
his pocket.
Meanwhile, the ruling BJD
and opposition BJP indulged in mudslinging following the attack on the CM.
While BJD spokesperson and Rajya Sabha member Pratap Keshari
Deb said the incident was condemnable in a democracy and termed it as a BJP-sponsored
act, the opposition BJP hit back at the former saying the attacker was not a
BJP worker.
The CM is on a two-day visit to by-poll bound Bijepur to seek
votes for party candidate Rita Sahu.
Earlier on January 31, a
woman identified as Rajeswari Kamila, a BJP worker, threw eggs at Patnaik
during the Talasari Beach Festival in Balasore district. However, Patnaik directed
police to withdraw all charges, including the attempt to murder charge against
the woman.