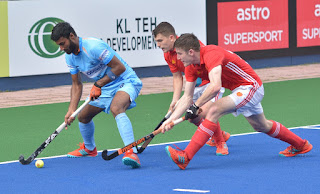 Ipoh (Malaysia), March 4, 2018: A young Indian Men’s Hockey
Team could not register their first win of the 27th Sultan Azlan Shah Cup 2018
as they drew their second match of the tournament against England 1-1. 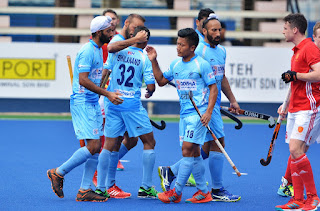 It was India who scored the first goal as Shilanand Lakra
found the back of the net in the 14th minute and for the most part, it looked
like India will take the 1-0 lead into the full-time whistle, but Mark
Gleghorne’s Penalty Stroke in the 52nd minute meant that the match ended a goal
apiece.
It was a positive start for both the teams as they looked to
threaten each other in the final third through some precise build-up play.
However, it was England who had a total of 10 circle entries inside the first
quarter but they could not be efficient as they took only four shots. Whereas,
India kept pushing for a counter attack which saw them having only four circle
entries in their opposition’s striking circle, and took only two shots in the
first quarter, the second of which turned out to be the opening goal of the
match which was scored by Shilanand Lakra in the 14th minute. England lost
possession of the ball in their own half and Ramandeep Singh’s pass to the
striking circle was hit first-time by Talwinder Singh, but England’s goalkeeper
Harry Gibson could only parry it straight to Shilanand Lakra, who made the most
of the opportunity by deflecting the ball into the back of the net to give his
team a 1-0 lead at the end of the first quarter.
The second quarter was more balanced between the two teams as
India started the quarter well, winning a total of eight Penalty Corners to put
England on the back-foot. However, India’s efforts on goal were either saved or
blocked by the English defence which meant that England survived the opening
spell of pressure created by the Indian team. In the latter phase of the
quarter, it was the English who controlled proceedings as they were constantly
threatening to find the equaliser, however India’s defence were resolute and
kept all of England’s four shots out to go into the half-time with a 1-0 lead.
England were awarded their first Penalty Corner of the match
towards the start of the third quarter and looked to make the most of India
being down to 10-men as Shilanand Lakra had earned himself a green card at the
stroke of the half-time hooter. However, to England’s disappointment, Mark
Gleghorne’s delivery was deflected off his teammate Ian Sloan as India survived
a nervy few minutes at the start of the third quarter. India had the better
chances in the third quarter and could have extended their lead but the English
defense was saved by their resolute defending in important scenarios.
The fourth quarter was an important one for both the teams as
India looked to snatch the victory with a second goal, while England were eager
to find the equaliser and make it an interesting final few minutes for the
crowd in Ipoh. The English attack struck to their task in the final quarter and
earned themselves a Penalty Stroke in the 52nd minute when India were found
guilty of a stick-check inside their own striking circle. It was England’s Mark
Gleghorne who showed his calm and experience as he beat India’s young
goalkeeper Krishan Pathak to find the equaliser for his team with eight minutes
to play. Both the teams then looked for the winner and India could have won the
match in the 59th minute when Varun Kumar hit a long pass inside the England’s
striking circle, but India’s attacking players could not be efficient as the
match finished with both teams locked at 1-1.
On March 6, India will take on Australia in their third match
at 15.30 hours IST. Matches will be telecast live on Star Sports 1, Star Sports
HD1 and Hotstar.