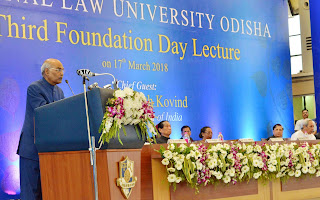 Cuttack (Odisha), March 17, 2018: Maintaining that the Indian legal
system has a reputation of being expensive and for being prone to delays,
President Ram Nath Kovind on Saturday called upon the law students here to ponder
and to rectify the issues in the course of their careers.

“Our legal
system has a reputation for being expensive and for being prone to delays. The use
and abuse of the instrument of adjournments is often done by advocates who see
adjournment as a tactic to slow down proceedings, rather than a response to a
genuine emergency,” said Kovind.
“This adds to the cost of obtaining justice for the litigant.
It would be a travesty of our republican ethic if a poor person did not get the
same access to the law as a rich person. Unfortunately, in practice this is
happening,” said Kovind.
Kovind was delivering the third Foundation Day Lecture of the
National Law University, Odisha (NLUO) here.
The President said that there are many issues for the
emerging generation of lawyers – including those studying at the NULO– to
ponder and to rectify in the course of their careers.
“The opportunities and rewards of this profession – both
intellectual and financial – are enormous. And this is welcome. But a good
legal professional is not just somebody with a mind – he or she is also
somebody with a heart,” added Kovind.
The event was also attended by Chief Justice of India (CJI)
Dipak Misra, Governor Dr SC Jamir, Chief Minister Naveen Patnaik and Union
Petroleum and Natural Gas and Skill Development and Entrepreneurship Minister
Dharmendra Pradhan.
The President is on a two-day visit to Odisha. He will leave
Odisha on Sunday afternoon.