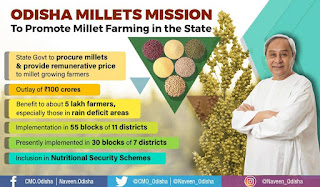 Bhubaneswar, March 19, 2018: Reaffirming farmer’s welfare and
empowerment as the State Government’s highest priority, Chief Minister Naveen
Patnaik on Monday announced expansion of Odisha Millets Mission.
Patnaik said that the Government will now procure millets
produce from farmers with remunerative prices.
The decision to expand Odisha Millets Mission to 11 millet
growing districts will positively touch lives of the large number of farmers,
covering especially the non irrigated and tribal areas, by ensuring higher
income guarantee for them.
“Millets are an integral part of tribal life. It has been a
staple diet of tribals of Odisha since time immemorial. Millets are grown
mostly in rain deficit areas by small and marginal farmers. State Government is
already implementing a pilot programme named as ‘Odisha Millets Mission” said
Patnaik.
The CM said to provide remunerative price to the millets
growing farmers and to improve the nutritional security, State Government will
procure millets and utilize in Government schemes.
An amount of Rs 100 crores will be
spent during next year for this purpose, which will be scaled up in
future. This will benefit around 5 lakh farmers, especially in the rain deficit
areas of the state.