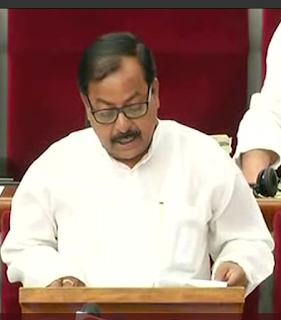 Bhubaneswar, March 23, 2018: Odisha Finance Minister
Sashi Bhusan Behera on Friday presented a Rs 1.20 lakh crore budget for 2018-19
in the State Assembly when the State is slated to go for polls in early parts
of 2019, giving major thrust to the agriculture and health sector.
Presenting the annual Budget of 1,20,028 crore, Behera said
the total outlay would be financed through revenue receipts of Rs 1,00,200
crore and borrowing and other receipts of Rs 19,678 crore
“An annual Budget of Rs 1,20,028 crore for 2018-19 financial
year was presented today which is an increase of 12.3 per cent over last year,”
said Behera.
The Minister also presented a separate budget of Rs 16,765
crore for agriculture sector which is being presented since 2013-14 financial
year.
“The separate agricultural budget which was introduced in
2013-14 with an outlay of Rs 7,162 crore has been increased to Rs 16,765 crore
in 2018-19, which is an increase of 130 per cent,” said Behera.
The Minister proposed Rs 450 crore for Farm Mechanisation
Programme to boost productivity and Rs 470 crore towards Interest Subvention while
Rs 200 crore has been proposed for improvement of water use efficiency and to
ensure last mile irrigation through field channels and pipes.
In order to boost fish productivity and production Rs 73 crore
has been allocated for development of Brackish Water Aquaculture, Marine
Fisheries Intensive Aquaculture and Inland fisheries.
Minister Behera proposed an allocation of Rs 90 crore towards
health insurance cover for about 57 lakh farmers’ families.
While allocation for supply of free medicines under Niramaya has
been increased to Rs 304 crore, an outlay of Rs 365 crore has been made for the
establishment of two more medical colleges and hospitals at Balasore and
Bolangir and Rs 700 crore for Mukhya Mantri Swasthya Seva Mission.
A manor provision of Rs 1,370 crore has been proposed to be
spent for National Health Mission for providing ambulance and healthcare
facilities.
The Minister also proposed Rs 1,800 crore for Sarba Sikhya
Abhiyan, Rs 808 crore for Mid-day Meal Scheme and Rs 500 crore for Rashtriya
Madhyamika Sikshya Abhiyan, respectively.