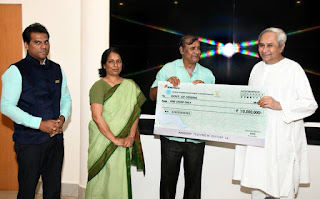 Bhubaneswar, April 10, 2018: For the first time since its
inception in 1980, Odisha Tourism Development Corporation (OTDC) on Tuesday paid
an interim dividend of Rs 1 crore to the State Government.
The PSU that started making profit in 2003-04 has earned a
net profit of Rs 5.89 crore in 2016-17, its accumulated profit till March 31 is
Rs 26.20 crore.
“Firmly on the growth-path with a transformed outlook,
Odisha Tourism Development Corporation has for the first time since its
inception declared an interim dividend for the Government. Chief Minister Naveen
Patnaik was handed the cheque of Rs 1 crore for FY
2017-18 by Tourism Minister Ashok Panda,” Chief Minister Naveen Patnaik posted
in his facebook page.
OTDC has set an ambitious target in turnover and
profitability by bringing complete reforms in its functioning, improvement in
facilities and introducing modern tourist services like air-conditioned
transport fleet. It is also focusing on promoting lesser known tourist spots of
Odisha.