Bhubaneswar, May 21, 2018: On the fourth anniversary of his Government,
Chief Minister Naveen Patnaik on Monday listed out 10 achievements of his Government
and advised his colleagues in the Cabinet to work hard every minute to honour
the faith of the people with 3 Ds – Dedication, Determination and Devotion. 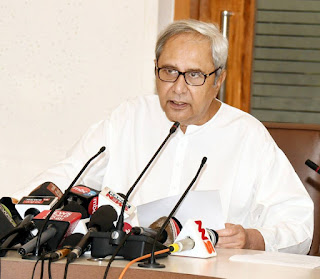 At the Council of Ministers meeting held at the State
Secretariat here, the CM expressed indebtedness to the 4.5 crore people of
Odisha for their faith in the BJD Government’s commitment and capability for an
empowered Odisha and pledged to work hard every minute to honour their faith
with Dedication, Determination and Devotion.
On this day May 21, 2014 Patnaik took oath of office of Chief
Minister for the fourth term.
As a measure of the depth of the commitment to the people –
in our first meeting of the Council of Ministers after taking oath of office on
May 21, 2014, the CM resolved to adopt its election manifesto as the policy of
Government.

The ten
achievements as follows
One of our topmost promises was housing security- to convert
all kucha houses to pucca houses. Odisha is a trailblazer at the national level
in rural housing. In the last 4 years nearly 17 lakh pucca houses have been
constructed. The remaining 7 lakh houses will be completed by March 5th as a
humble tribute to the great Biju Babu.
We have enacted historic legislation to enable slum dwellers
in urban areas to have land and property rights. Nearly 10 lakh people will be
empowered through this initiative – unprecedented in the world in its scope and
scale.
Agriculture is the mainstay of our population and we are the
only State to have doubled farmers incomes in the last decade. We promised 10
lakh hectares of additional irrigation potential. We have already achieved 7
lakh hectares and we are racing towards achieving the target by April 1st 2019.
Food grain production is at an all time high of 117 lakh Metric tonnes. Odisha
is one of the highest contributors to the nation’s food security. My Government
has always focussed on vulnerable groups in every sector. Share croppers will
be provided crop loans and our farmers in rainfed areas will get remunerative
prices under the Millets Mission.
Providing Connectivity is a priority for my Government.
Odisha leads the country in the construction of rural roads with a record
22,500 kilometres in the last 4 years. 600 bridges have been constructed under
the Biju Setu Yojana. Biju Expressway connecting North and South Odisha passing
through the KBK region is on target. The Utkal Gourav Madhusudan Setu over
Mahanadi and key bridges over Ib river and Kathjodi were completed in record
time and reduced distances considerably. The Gurupriya bridge in Malkangiri
will also be operational shortly.
Health for all is our mission. 4 new medical colleges have
started at Koraput, Baripada, Balasore and Bolangir and 5 more are in the
offing. Odisha has had the sharpest decline in Infant Mortality among all the
states and is today better than the national average.
Women’s Empowerment underlies all our schemes and
initiatives. More than 30 lakh women have availed the benefits of the Mamata
Yojana. Nearly 70 lakh women are part of Mission Shakti. 50 percent reservation
for women in Panchayati Raj Institutions has ensured strong representation of
women in decision making platforms.
Education and Skill Development are critical to empower our
next generation. 190 Adarsh Vidyalayas or Model schools have been made
operational with more than 56 thousand students. Education loans at 1% and
scholarships for nearly 20 lakh students seek to bridge the gap in education.
Mo School campaign is an innovative intervention to link community and alumni
to their alma maters.
Odisha Skill Mission was set up to Skill 11 lakh aspiring
youth. We have already trained 9 lakh young people as part of our commitment to
provide employment and strengthen livelihoods.
Employment oriented Industrial growth has been our focus.
Nearly 1.8 lakh crores worth of projects have been initiated with an employment
potential of 1.32 lakhs. In the last 4 years, exports have increased over two
and half times with the highest growth rate in the country. Odisha is ranked as
the champion State in exports. We top the country in live manufacturing
investments.
17 lakh households have been electrified in the last 4 years
and we are on target to provide electricity to all households by October 2nd.
Drinking water has been a major focus for our Government.
Atleast 2 villages in every Panchayat will be provided piped water supply by
the end of this year.
Inclusive growth is our driving force. Special Development Councils
have been constituted in 9 tribal districts to preserve and protect unique
cultural identities among our tribal groups. These Councils will have
representation from all the tribal groups that they constitute.
Odia language has been accorded the status of a classical
language and the Special Cabinet held at Puri on 26th December 2017 took
several decisions to promote our mother tongue in all walks of life.
In Odisha Sports is life. We hosted the 22nd Asian Athletics
Championships in a record 90 days. Our people’s love for hockey prompted us to
become the sponsors for our National teams and it is indeed a matter of pride
for us when Team India sports the Odisha jersey and logo.
“I am indebted to the 4 and half crore people of Odisha who
have faith in our commitment and capability for working towards an empowered
Odisha. 3Ts of Transparency, Teamwork and Technology will be our mantra to
bring about this transformation,” said Patnaik.
Let us all pledge to work hard every minute to honour the
faith of our people with Dedication, Determination and Devotion, urged the
Chief Minister.