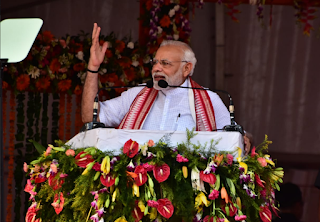 Cuttack (Odisha), May 26, 2018: Prime Minister Narendra Modi on Saturday enthralled
the people here by beginning his address in Odia at the Bali Yatra Ground in
Cuttack in Odisha during party’s Jana Kalyan Samavesh to mark the fourth anniversary
of his Government at the Centre.
The Prime Minister began his speech by saying ‘Jay Jagannath ‘
and Odisha Basi Nku Bahut Bahut Namaskar (Namaskar in Odia) and thanking the
people and later switched to Hindi.
I am fortunate to greet my countrymen from Odisha- the land
of Lord Jagannath and it is the birthplace of great freedom fighter Netaji
Subhash Chandra Bose, said Modi.
The fact that the party chose Odisha to celebrate a day of significance justifies the high hopes BJP, the estranged ally of the ruling BJD, has here. From a distant third position in the 2014 Lok Sabha and State Assembly polls, the saffron party has managed to emerge as the principal challenger to Naveen Patnaik’s Biju Janata Dal (BJD) now.
BJP aspires to up its Lok Sabha tally from a State where it had won only one out of 21 seats Jual Oram from Sundargarh.
PM Modi, while addressing, a euphoric gathering also targeted
the Congress.
While attacking the, the Grand Old Party, PM Modi said that
the party has no respect for common people.
Targeting the former Prime Minister Manmohan Singh, Modi said
key decisions are taken when the country is run by a ‘Government of commitment’
and not by ‘Government of confusion.