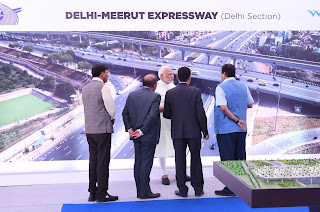 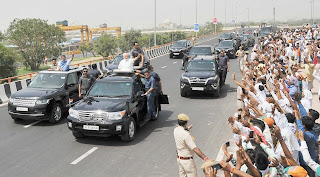 The first of these is the 14 lane, access controlled,
Phase-I of the Delhi-Meerut Expressway, stretching from Nizamuddin Bridge to
Delhi UP Border. The second project to be dedicated to the nation is the 135 km
long Eastern Peripheral Expressway (EPE), stretching from Kundli on NH 1 to
Palwal on NH 2. 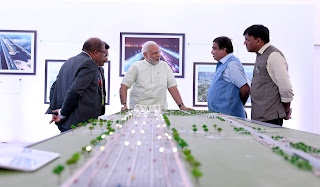 The Delhi Meerut Expressway, once completed, will reduce
travel time by 40 minutes from the national capital to Meerut, and to several
other parts of Western Uttar Pradesh and Uttarakhand. The Delhi-Meerut
Expressway, stretching from Nizammudin Bridge to Delhi-UP border, has been
completed in a record time of 18 months. The 135-km-long Eastern Peripheral
Expressway has been built in a record time of 17 months.
After the inauguration of the Delhi Meerut Expressway, the
Prime Minister travelled in an open jeep for a few kilometres, inspecting the
highway. Union Road Transport and Shipping Minister Nitin Gadkari too rode in a
separate open car alongside PM Modi.
Addressing a public meeting in Baghpat on the occasion, the
PM expressed confidence that the entire stretch of the Delhi Meerut Expressway
would be completed soon. He said the Eastern Peripheral Expressway would help
decongest traffic in Delhi.