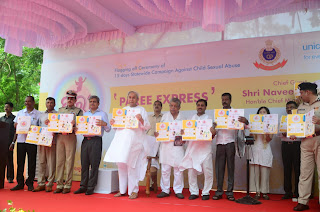 Bhubaneswar, May 28, 2018: Chief Minister Naveen Patnaik on
Monday flagged off Paree Express that would move across the State as part of
the ‘Save Paree campaign of Odisha Police and UNICEF to check child rape and
sexual abuse.
The State-wide mega awareness campaign titled ‘Paree Pain Katha
Tie’ was aimed at spreading awareness on incidents of sexual assaults against
minor girls and women in Odisha. 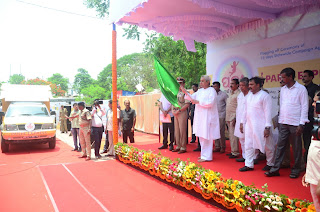 Women and Child Development Minister Prafulla Samal, DGP Dr
RP Sharma, Yumi Bae, State Chief UNICEF, and Arun Bothra, Inspector-General
Crime Branch was also present.
As many as 15 chariots dubbed as Pari Express started
rolling from AG Square. Each chariot will cover two districts in 15 days and
after the end of the campaign, all the chariots will converge in Bhubaneswar
for a valedictory function on June 12. The chariots will have LCD screens to
show audio-visuals. During the campaign community interaction will also be
held.
UNICEF is the technical collaborative partner of Odisha
Police in the initiative. Asheet Kumar Panigrahi, IG police headquarters has
been appointed as the Nodal officer for the awareness drive.
The DGP said that from 2014 to 2018, Odisha witnessed around
2200 rape cases out of which 1200 involved minors. In several incidents, the
victims were assaulted by known persons, including neighbourers, people staying
in the same locality, community and others.
Besides sexual abuse of minors, over 2100 cases of rape were
reported on an average every year in the last three years.
The campaign will be led by the District Superintendents of
Police (SPs) and Collectors of the respective districts.