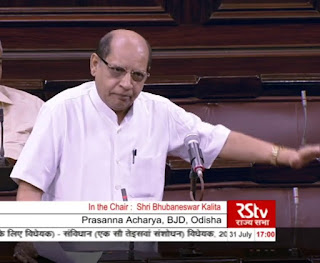 Bhubaneswar, June 1, 2018: BJD’s Prasanna Acharya and TMC MP Sukhendu
Sekhar Ray could be fielded for the Rajya Sabha Deputy Chairman’s post as incumbent
PJ Kurien’s terms gets over this month.
Kurien’s term as Deputy Chairman will end this month and
elections for the post are likely to be held when the Upper House reassembles
for the Monsoon Session.
BJD holds the key in the poll with nine MPs in the Upper
House. The BJP-led National Democratic Alliance (NDA) has 105 MPs (BJP-69).
Now, Rajya Sabha Deputy Chairman’s election will be next BJP-Opposition
battleground after the Karnataka Assembly elections and recently concluded Lok Sabha
and Assembly bypolls in many States where BJP bite the dust in front of an
united opposition.
Sources said the Congress has reached out to Naveen Patnaik’s
Biju Janata Dal (BJD), its arch rival in Odisha, in a desperate attempt to
defeat the NDA in the upcoming Deputy Chairman election.
The winning candidate needs 122 votes if all the 245 members
vote. The Opposition has 117 votes, if one were to include six members of the
former NDA ally Chandrababu Naidu’s Telugu Desam Party (TDP).
Sources said if the BJD comes along with the Congress, the
grand old party will cross the majority mark of 122.
Now, all eyes are set on BJD president and Chief Minister
Naveen Patnaik, a suave man who barely makes any news until the moment of truth
arrives. Patnaik is always claiming that his party is maintaining equidistance
from both BJP and Congress.
According to sources Trinamool’s Sukhendu Sekhar Ray could also
be fielded for the Deputy Chairman’s post.