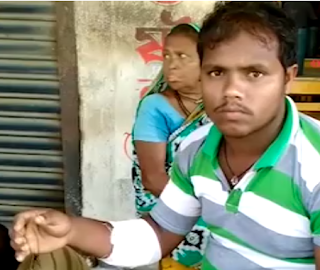 Kendrapara, June 6, 2018: Two fisherwomen displayed immense
courage to rescue a youth from the jaws of an adult crocodile in a canal at Kinamandala
near Badatubi village under Mahakapada police station in Kendrapara district on
Wednesday.
Kinaram Mandal had gone to the canal to attend nature’s call
in the wee hours of Wednesday when a crocodile grabbed his right hand and started
pulling him into the water with its terrifying jaws.
The two fisherwomen who were catching fish nearby heard his
shrieks. Both the women rushed to the spot and started throwing stones at the
crocodile to scare it away. After the battle which continued for couple of
minutes, the reptile released Kinaram and retreated in the river.
The injured youth was immediately rushed to the Ramnagar
Hospital nearby. He was said to be in a stable condition.
Earlier on April 4, 2017, a Class –III girl identified as
Mamata Dalei exhibited exemplary bravery in saving her younger sister from
crocodile attack in Bankuala village under Rajnagar tehsil of the district.  Mamata was among the 18 children, including
seven girls, who got the the National Bravery Awards 2017.