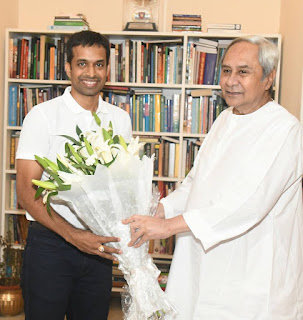 Bhubaneswar, June 8, 2018: The Odisha
Government on Friday signed MoU with Pullela Gopichand Badminton Foundation to
set up a world-class Badminton Academy in Odisha.
The MoU was signed in the presence of
Chief Minister Naveen Patnaik and Pullela Gopichand at the State Secretariat
here.
The CM said the partnership with
badminton legend will groom world champions and help realise Odisha’s
aspirations to win Olympic medals.
With his guidance, many Badminton
players have gone on to triumph at national and international levels. He said
that for a state aiming for Olympics, there is no better coach than Pullela
Gopichand and assured that the State Government will provide him and his
foundation all support, said the CM.
He released a documentary and coffee-table
book titled ‘Challenge to Opportunity’ on AAC2017. Recalling the grand success
of 22nd Asian Athletics Championships in Bhubaneswar, Chief Minister stated
that the event demonstrated the leadership ability of the state and emergence
of Bhubaneswar as sports capital of India.
On the occasion Gopichand hailed
State Government’s vision for bringing Odisha to global sporting map through
gala events like AAC 2017 and Hockey World League Finals and initiatives like
sponsorship of Indian Hockey Team and establishment of high performance
training centres.
Odisha, the emerging sports capital
of India, has demonstrated leadership to take up challenge and take it to
conclusion like successfully hosting AAC2017 in only 90 days. We’ve taken
path-breaking step for promoting sports by being first state in country to
sponsor Indian Hockey Teams.
The appreciation of legend like
Pullela Gopichand for our efforts to promote sports is encouragement to do
more, added the CM.