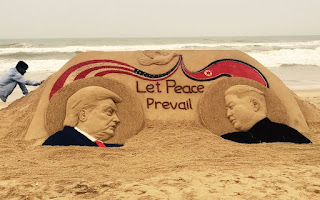 Puri
(Odisha), June 11, 2018: Sand artist Sudarsan Pattnaik on Monday created a sand
sculpture on peace in Odisha ahead of the proposed meeting between US
President Donald Trump would meet North Korean leader Kim Jong-un on Tuesday in
Singapore.
Pattnaik
created the seven-foot sculpture of Donald Trump and Kim Jong-un with their respective
national flags by using about six tons of sand, bearing a message “Let Peace
Prevail”, on a beach in Puri, 55 km from the State capital Bhubaneswar.
“It
will be a historic meeting in Singapore. We welcome both the country for
choosing peace,” said the internationally acclaimed sand artist.
So
far. the Padma Shri awardee sand sculptor has participated in more than 60
International sand sculpture championships and festivals around the World and
won many prizes for our country. He always tries to spread awareness through
his sand art. His sculptures on world peace, Global warming, Stop terrorism,
HIV/AIDS etc are giving positive messages to the World.
The stakes for US President Donald Trump’s historic summit with
North Korean leader Kim Jong-un are considerably higher. Their unprecedented
meeting Tuesday comes after a year in which Trump threatened to totally
destroy North Korea.
Trump would meet Kim Jong-un at 9 am Singapore time on June 12. Odisha Budget utilisation goes up to more than Rs 16,000 crore