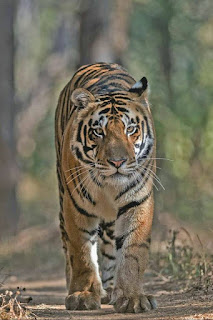 Bhubaneswar, June 23, 2018: Odisha Chief Minister Naveen
Patnaik congratulated to Kanha Tiger Reserve and State Forest and Environment
Department for the successful translocation of MB2, the first of six planned
tigers brought to Satkosia Tiger Reserve in India’s first inter-State Tiger Relocation
effort.
The Chief Minister said history has been created with the successful
translocation.
This is a monumental step for revival of tiger population,
improvement of genetic pool and boost conservation efforts. I am sure our guest
MB2 and the subsequent ones will effortlessly assimilate into the verdant and
prey-rich Satkosia Reserve, which makes a perfect home for them.
The CM wished to the Forest Department and Satkosia TR
authorities for making the first inter-state translocation exercise a grand
success and transforming it into a model in wildlife conservation.
In the first such case of inter-State relocation, MB2, a three-year-old
195-kg tiger, was shifted from the Kanha Tiger Reserve in Madhya Pradesh to the
Satkosia Tiger Reserve in Odisha on Thursday.
This is part of an ambitious project conceived by the Union
Ministry of Environment and Forests, National Tiger Conservation Authority
(NTCA) and Wildlife Institute of India (WII), Dehradun, that involves shifting of
three pairs of tigers (six tigers) from different reserves in the central State
to the eastern State of Odisha.