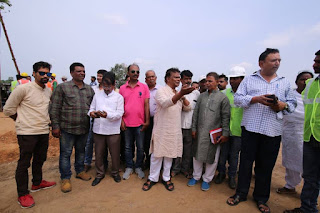 Rourkela, June 25, 2018: In fresh embarrassment for the BJP,
party Rourkela MLA Dilip Ray on Monday said that the pace at which the work
of six-lane second Brahmani bridge at Balighat here is being executed is
greatly disappointing. 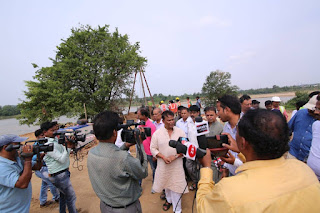 Prime Minister Narendra Modi, who had announced to complete
the National Highway (NH)-143 upgradation project from Biramitrapur to
Rajamunda, including second Brahmani bridge, in April 2015, had to face
criticism both from ruling BJD, BJP and Opposition after the project got
delayed.
It was in June second week, piling of piling works began for
construction of the six-lane second Brahmani bridge after a considerable delay and
saved the NDA Government from further embarrassment as disgruntled Ray had
threatened to resort to stir from June.
On Monday, Ray inspected the Construction site of the second
ROB over River Brahmani.
“I was surprised to see only 14 workers being employed in a
project with a budgetary cost of above Rs 380 crores. The pace at which the
work is being executed is greatly disappointing. It will now be one year since
the day the foundation stone for the bridge was laid and the only visible
progress is the piling work of 20ft,” said Ray, adding that at this speed, one
can only wonder how many more years it is going to take for the work to be
accomplished.
The existing Bridge is in a completely dilapidated state and
could result in a major mishap anytime.
“A major crack surfaced up again in Bridge two-three days
back and it is highly unfortunate that despite seeing the wretched condition of
the Bridge which was constructed nearly six decades back, the executing
agencies are moving such a snail pace,” said Ray.
I am not at all satisfied seeing the speed at which is
construction is being executed and sincerely hope that the executing agencies
take due cognizance of the urgency and importance of the bridge for the region
and take immediate measures to expedite the construction, rued the lawmaker.
Hyderabad-based GKC Project Limited has bagged the first
package from Birmitrapur to Rourkela, including the new bridge with an
estimated cost of Rs 382 crore.
Though Union Minister for Road Transport and Highways Nitin
Gadkari, who laid the foundation stone on July 21, 2017, had asserted that the
work will start in 15 days, but it was delayed. Time has come for a change in Odisha, says PM Modi