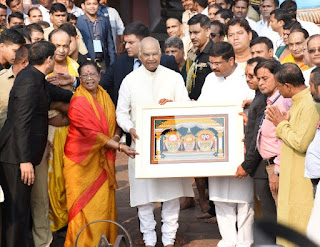 Puri, June 26, 2018: The Jagannath Temple here is back in
the spotlight for all the wrong reasons. Three servitors of Jagannath temple
reportedly pushed and nudged Savita Kovind, the First Lady of India during the
President couple’s visit to the 12th century shrine on March 18 this year.
The shocking revelation has came to fore after the Shree
Jagannath Temple Administration (SJTA) decided to serve show-cause notice to
the three erring servitors recently after the Rashtrapati Bhavan expressed
strong displeasure over the incident and sent a letter to the Puri Collector to
this effect.
Sources said the Puri Collector received a letter from
Rastrapati Bhavan in March fourth week and the matter was taken at the Jagannath
Temple Managing Committee meeting chaired by Puri King Dibya Singh Deb held on
April 4. After Puri Collector Aravind Agrawal informed the committee about the
Rastrapati Bhavan letter, the SJTA started an inquiry.
However, the fresh Managing Committee meeting held on June 23
had decided to serve show-cause notice to the three servitors.
The shameful incident has put the Puri district
administration, Shree Jagannath Temple Administration and State administration in
a fix.
On March 18, Kovind and his wife paid their maiden visits to
the temple. Breaching his tight security protocol, three servitors aged about
50 allegedly came close to the VVIP couple and pushed and nudged them, much to
the discomfiture of the President and the First Lady.
The brazen incident came to limelight when the Supreme Court, while hearing a PIL filed by Cuttack-based
lawyer Mrinalini Padhi on June 8, took strong note of the exploitative conduct
of servitors at Puri Jagannath Temple and directed the State Government to take
adequate measures to prevent harassment of devotees.

Servitors of Jagannath Temple often hog limelight for their
bad behaviour with devotees.