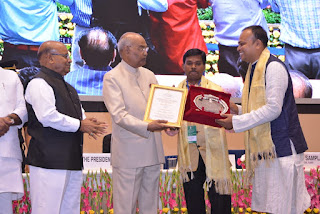 Bhubaneswar/New Delhi, June 26, 2018: Lariapalli, a small
tribal village in Odisha which once had an addiction rate of 90 per cent, on Tuesday
received a National Award for outstanding services in the field of Prevention
of Alcoholism and Substance (Drug) Abuse, 2018 from President Ram Nath Kovind.

Kovidn was presenting awards on the occasion of the
International Day against Drug Abuse and Illicit Trafficking.

Over the last three years, this Gram Panchayat that used to
consume 240 liters of alcohol per day has now become a no alcohol region,
thanks to the concerted efforts made through a partnership program between The
Art of Living and The Government of Odisha.
Owing to persistent efforts in community mobilization,
awareness drives and behavioral training workshops organized and led by The Art
of Living volunteers under the leadership of Bhola Nath, director, Art of
Living, Social Causes, with the support of the head of the Gram Panchayat
Shukru Kujur and Odisha Government, that brought large scale attitudinal shifts
in this particular village.
In a letter recommending this Gram Panchayat for the National
Awards, the Odisha Government detailed the innovative approach that helped make
this area completely addiction-free, and said it was the emphasis on bringing
behavioral changes through the means of Yoga, Pranayama and Meditation with the
help of The Art of Living’s Vyakti Vikas Kendra, making it a truly community
driven program, that led to this success.
Uniquely, before starting off with the community mobilization
drive, a key aspect of the transformation process, Bhola Nath also led 50
village locals, including Sarpanch of Lariapalli, Shukri Kujur through a
transformative community empowerment workshop called the Youth Leadership
Training Program. After going through the program, Kujur passionately got
involved in making the village addiction free.
The Art of Living conducted ethical and motivational training
of these volunteers to become development agents for bringing about positive
attitudinal change in the tribal population. The extent of alcohol consumption
was 2.40 quintal/day in the 9 revenue villages and 3 hamlets of the Lariapalli
G.P according to Excise Department information. Now it has reduced to zero.
There were six excise cases of illicit selling of country
liquor in the year 2016-17, which have come down to three cases in 2017-18 and
so far Nil during this year.
After the liquor shops being shut down and those running
illicit liquor businesses and those working there have been brought into work
under MGNREGS engagement, particularly in developing water harvest structures
and irrigation for agriculture including horticultural plantations, gainfully
employing them.
Through door-to-door survey the volunteers continue to
identify regular addicts and work towards bringing them out of the addictions
by providing them social engagement and spiritual tools to manage their
addictions.
With awareness drives, and The Art of Living’s behavioral
change programs like Youth Leadership Training Program, the GP managed to curb
the demand side, and imposed heavy fines on people caught selling alcohol to
curb the supply side of this industry.