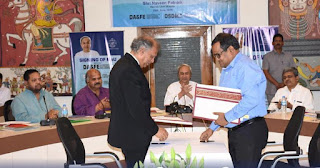 Bhubaneswar, June 29, 2018: The Odisha government on Friday signed
a MoU with the Regional Integrated Multi-Hazard Early Warning System (RIMES)
for enhancing early warning system for effective management of all kinds of disasters
in the State, including flood, drought, heat wave, lightning, and road
accidents.
The State Government is aiming to integrate new generation
digital algorithm-based technologies and best practices from 48 RIMES member
countries of Asia, Africa and the Pacific to Odisha State Disaster Management
Authority (OSDMA).
The memorandum of understanding (MoU) in was signed by Disaster
Management Secretary and OSDMA Managing Director Bishnupada Sethi and A R
Subbiah of RIMES in the presence of Chief Minister Naveen Patnaik in
Bhubaneswar, Revenue and Disaster Management Minister Maheswar Mohanty, Chief
Secretary Aditya Prasad Padhi, Agriculture Production Commissioner (APC) Gagan
Kumar Dhal, Principal Secretary and Secretaries of various departments, along
with other senior officials were present during signing of the MoU.
Odisha is vulnerable to natural disasters like cyclone,
flood, tsunami and drought. In the recent past, increasing number of deaths due
to lightning, heat wave and road accidents has been a major concern for the State
Government.
As the Chief Minister always lays emphasis on zero casualties
for all disasters, the State Government has taken up various initiatives for
strengthening the early warning systems by implementing latest technologies and
building partnerships with international agencies to curb the rising number of
deaths due to low-intensity, high-frequency disasters and protect livelihoods
from losses due to slow-onset disasters like drought.
The MoU could bring a shift from “What Weather Will Be” to
“What Weather Will Do” Risk Based Early Warning system into OSDMA’s
operations.
This MoU will enable development and pilot implementation of
decision support systems that will make seamless use of weather and climate
information at three days, ten days, one month, and three months into the
future, sourced from India Meteorological Department (IMD) for automating risk
assessment and advisory generation and dissemination.
These tools will be built with open-source software platforms
and public domain data sets, with full involvement of OSDMA and its line
departments and collaborating agencies.
These integration systems will be capable of crunching
terabytes of national, regional and global data sets, in real-time, using
state-of-the-art big data analytics to generate operational decision support
derivatives to be rendered through user-friendly interfaces to end-of-line EOC
managers to prepare and respond to hazards.
Initially, the agreement will in force for five years with a
cost involvement of about Rs 8 crore.
RIMES and OSDMA collaboration will contribute to global
efforts targeted to substantially increase the availability of and access to
multi-hazard early warning systems as articulated in the Sendai Framework for
Disaster Risk Reduction 2015-2030 with strong endorsement of the value of early
warning systems as a part of a broader disaster risk reduction strategy and
disaster risk reduction and resilience agenda embedded in the 2030 Agenda for
Sustainable Development.
RIMES is a UN registered international and inter-governmental
institution, owned and managed by its 48 members and collaborating states for
building capacities in the generation and application of user-relevant early
warning information.
In India, it has collaborated with the Tamil Nadu government
through establishment of a long-term collaborative program to enhance early
warning system for all natural hazards.