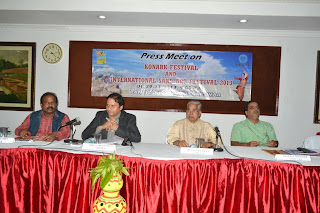 Bhubaneswar: The Department of Tourism,
in association with Odisha Tourism Development Corporation (OTDC) and Odisha Sangeet
Natak Academy,
is all set to organise the Konark Festival and the International Sand Art
Festival at the open air auditorium and Chandrabhaga beach respectively from December
1 to 5.
Each
year the majestic Sun Temple of Konark serves as a backdrop to the
scintillating Konark Dance Festival, which is a platform for different
classical dance styles coming together to exhibit the beauty of those art
forms.
An annual
fête of Indian classical dance and music, the Konark Festival is one of the
biggest dance festivals in the country, bringing champions of different
classical and traditional dance forms together to display their skill and
mastery over age-old dance forms such as Bharatnatyam, Kuchipudi, Manipuri,
Odissi, Mohiniyattam and Kathak dance styles, amongst others. Since 1989, the
Konark Dance Festival has been drawing tourists and dance and music lovers
alike to the sandy shores of Konark every year. This year 10 national and
international acclaimed artistes / groups have confirmed their participation at
the ensuing festival.
The
list includes well known performers such as Sadanam Balakrishnan, Aloka
Kanungo, Singhjit Singh, Dr. Alekhya Punjala, Anitha Guha, Rani Karnaa and
Ileana Citaristi etc.. The five-day festival will showcase performances in
Odissi, Kathak, Manipuri, Bharatnatyam, Kathakali & Mohiniyattam and Kuchipudi.
A number of artists from different parts of the country such as Raipur, Chennai, Keral, Manipur, Hyderabad and Kolkata will be performing at
the festival this year along with noted artistes from Odisha.