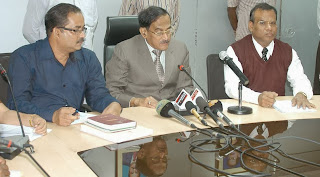 Bhubaneswar: The State Election Commission (SEC) on Friday
announced the schedule for the voting for the Bhubaneswar Municipal Corporation
(BMC).
Announcing the dates for the poll, State Election Commission
(SEC) Ajit Tripathy said the polls will be held on January 8, 2014 and counting
will take place the next day, January 9. Elections will be held to 67 wards of
the BMC. Of the total 67, 34 wards were reserved for women, six for SC, three
for ST, 19 wards each for Backward Class Citizen (BCC) and Reserved Woman (RW)
category and 20 wards as unreserved.
The BMC’s term would
end on December 9, 2013.
“With the announcement of the poll schedule, the model code
of conduct was put to immediate effect and will remain in force till the
completion of the counting on January, 9,” said Tripathy.
While the filing of nominations would begin from December 16
and close on December 20, the scrutiny of nominations will be held on December
23 and withdrawal of nominations will be done on December 26.
The election of the Mayor and the Deputy Mayor will take
place on January 17 and February 5 respectively.
Tripathy said two IAS officers and three other officials
will be engaged as observers and expenditure observers for the smooth conduct
of the poll. A candidate can spend upto Rs 50,000.

22 posts created at Puri DIB ahead of Nabakalebara