Salepur: Taking inspiration from the spectacular performance
of the Aam Aadmi Party (AAP) in the Delhi Assembly elections, expelled Congress
leader Soumya Ranjan Patnaik on Sunday said Ama Odisha, the political outfit
recently launched by him, can do an encore in Odisha.
“The performance of the AAP, which was launched just nine
months ago, in the Delhi elections just goes to show that time is not a
constraint in winning elections if there is the right degree of commitment,
dedication and hard work,” Patnaik said addressing an impressive rally here Salepur
high school ground.
“The five months left for the elections in our state is
enough for us to present a political alternative to the BJD and Congress,” he claimed.
Launching a scathing attack on the Congress high command,
Patnaik said it had washed its hands off the state unit in the fond hope that
Naveen Patnaik would bail it out after the 2014 elections. 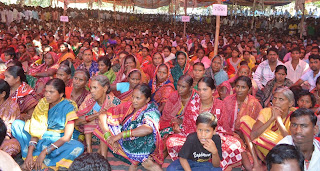 Paraphrasing a well known Odia couplet by saint poet Bhima
Bhoi, he said; “The attitude of the Congress high command is; “Even if the
state unit of the party goes to hell, let the high command not be harmed.”
Bluntly accusing the Congress of having an underhand deal with the Naveen
Patnaik led BJD, he said; “The BJP was Naveen Babu’s old ally and the Congress
id his new ally.”
Turning his attention to the BJD government in the state, he
said it had miserably in its elementary duty of ensuring the security of women
in the state.
“From Manas Mohini to Bebina to Itishree, each case
underlines the abject failure of the BJD government to provide security and
justice to women,” he said.
The government’s own data says one woman is raped every
eight hours while there are no less than 1200 rapes in the state in a year, he
pointed out.
Accusing the government of patronising the interest of
corporate houses instead of the common man, Patnaik cited its failure to act
against Bhushan Steel Limited in Dhenkanal even after 100 people have died in
accidents at the plant since it was launched eight year ago.
Similar rallies are planned in the near future in Bhadrak,
Mayurbahnj and Keonjhar, Ama Odisha sources said.