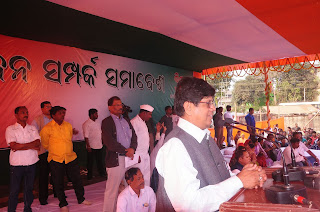 Baripada: Ama Odisha founder Soumya Ranjan Patnaik on
Wednesday said an alliance of Biju Janata Dal (BJD) and the Congress is
running the state.
Addressing a well attended rally at the Madhuban mini
stadium here this afternoon, Patnaik said there is a tacit understanding
between the two parties, which had enabled the BJD to rule unhindered. Both
these parties are engaged in systematically destroying institutions, he said. 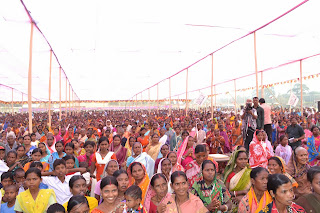 Singling out the BJD for special treatment, Patnaik said the
party had run the state with a mixture of lies and bribes. He cited the false
statement of the Revenue minister Surya Narayan Patro in the state Assembly
during its just concluded session about the central aid for areas affected by the
recent cyclone and floods as a case in point.
The government had also been lying to the people ever since
it came to power in 2000 and had failed to keep any of the promises it had made
to the people. It has sought to perpetuate its rule through bribes to the
voters, he added.
While education in the state was in complete disarray, there
was no security for women in the state. Families of victims of rape and murder
have been sought to be silenced through monetary compensation, the Editor of
‘Sambad’ said.
Not satisfied with looting the state exchequer through a
host of scams like the mining scam, the BJD government did not spare even
ordinary people by promoting and protecting chit fund companies, the Patnaik
said.
He said the rich forests and mineral resources of Mayurbhanj
had been ravaged over the years, but there had been no development in the
district in the 66 years since independence.
The same was true of true of the whole of the state as well,
he said adding the state had seen precious little development despite the rich
natural resources it had been endowed with. Patnaik said Ama Odisha seeks to
provide an alternative to the parties that have taken the state down the road
to poverty and unemployment. “There is a need for change and Ama Odisha promises
to usher in that change. I call upon all of you to become part of the process
of this change,” he said.
Ama Odisha state convenor Mohammed Shakeel, Mayurbhanj
district unit coordinator
Soumya Ranjan Patnaik and district president of Gaon Saathi
Sangha Karunakar Nayak also spoke at the meeting, which was presided over by
Ama Odisha secretary Swaraj Mishra.
Earlier, Patnaik prayed at the Maa Ambika temple, the
presiding deity of Baripada, before being brought to the meeting venue in a
motor cycle rally from Murgabadi square. Travelling in an open jeep, the Ama
Odisha founder waved to the enthusiastic crowd that greeted him all along the
road as the rally winded its way through the main thoroughfares of the town.