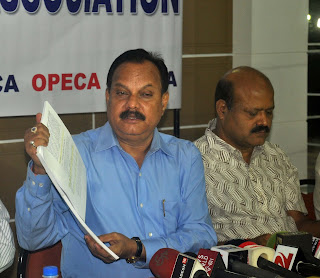 Bhubaneswar, July 8: The Odisha Private Engineering
College Association (OPECA) on Friday threatened to move to the court of law protesting
the increase in the intake capacity of seats in B. Tech and M. Tech streams at
the Government engineering colleges with the approval of All India Council for Technical
Education (AICTE).
“For the 2016-17 academic session, the Government has
increased as many as 2,329 seats, 1,550 in BTech and 779 in MTech courses, in
the Government engineering colleges without AICTE approval,” OPECA honorary
secretary Binod Dash told reporters here.
Dash told reporters here that students getting
admitted against the unapproved seats will face difficulty in getting GATE scholarship
and while appearing for UPSC and OPSC examinations and for pursuing higher
education.
“We urge the Government to stop admissions in these
seats at the earliest else the OPECA will move to the court of law against the
illegality,” said Dash
He said CET, Bhubaneswar has the highest 350 number
of unapproved seats for BTech courses followed by the IGIT Sarang and the Parala
Maharaj Engineering College, Brahmapur with 330 and 300 unapproved seats,
respectively. For MTech courses, while the CET, Bhubaneswar has 67 AICTE-approved
seats, the OJEE website displays 288 seats, an increase of 221 excess seats. The
IGIT Sarang has increased 216 seats for MTech courses without AICTE approval.