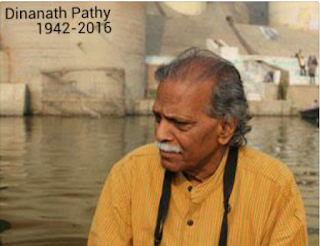 Bhubaneswar, Aug 29: Eminent painter, writer and art
historian Dr Dinanath Pathy passed away on Monday after a massive cardiac arrest
at a private hospital here. He was 74.
Pathy was known for his collaborations with German art
historian Eberhard Fischer and his work with the Rietberg Society in Zurich,
Switzerland.
In 2014, he was nominated for the Rietberg Award,
recognising his lifetime’s work and contribution to Indian art history. He was
the founder Principal of B.K College of Art and Crafts (Bhubaneswar). He was
the recipient of ‘President of India Silver Plaque’ for Painting.
He published over 40 books on classical, traditional, tribal,
folk, rural and contemporary art of Odisha and was well known for promoting
Odia art all over the world, in addition to writing poetry and teaching.
He began his work as a theatre curtain painter and went on
become the secretary of the National Academy of Art and Central Lalit Kala Akademi.
Condolences on his demise pour in from several quarters from
all over the world. Chief Minister Naveen Patnaik, Union Petroleum and Natural Gas
Minister Dharmendra Pradhan, eminent socio-political leader and Chairman of
SNSMT Suparno Satpathy among many others condoled the death of Pathy.
“We have lost a great painter an encyclopedia of art
history,” tweeted Pathy.
Culture Minister Ashok Panda, MPs Baijayant Panda and
Prasanna Patsani expressed their deep condolence on his demise. People from different
walks of life visited his home at Bhimtangi here to the pay their last homage
to the veteran painter.